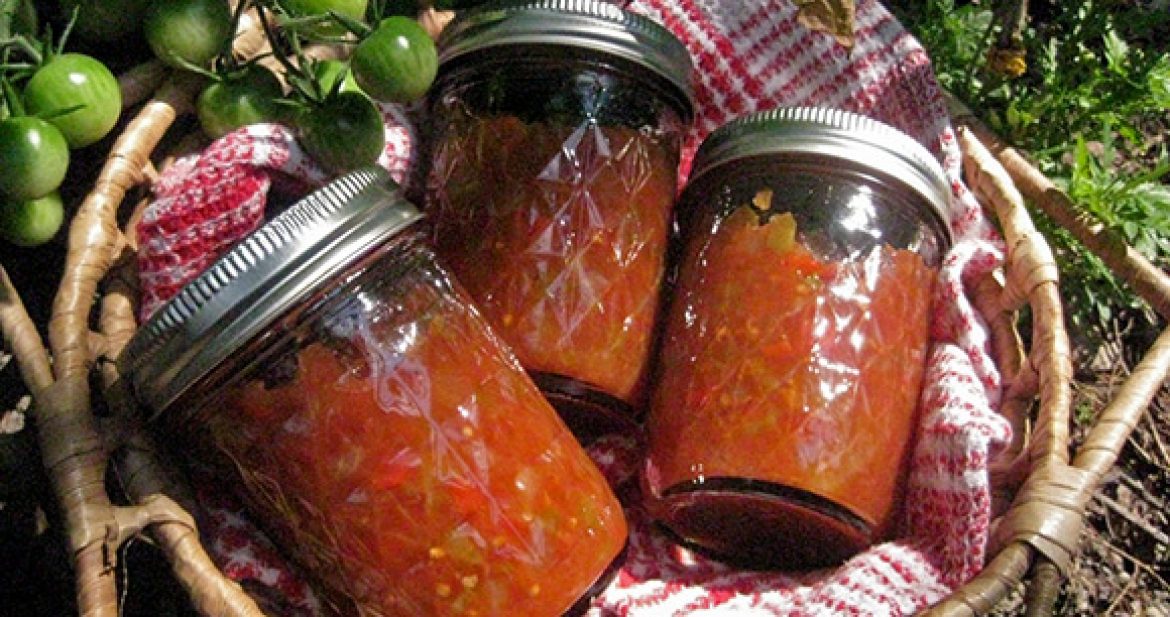 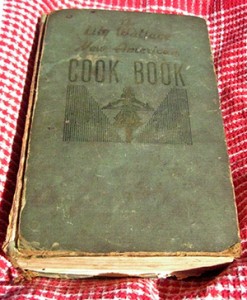 Every year, my mom makes and cans chili sauce based on a recipe from The Lily Wallace New American Cook Book.  This edition of the book was published in 1947 and is just amazing for its unusual recipes (more on that in another post.)  The “chili sauce” is nothing like what I think of when I hear the word “chili”; it is more like a thick, flavorful tomato soup.  At least I eat it like a tomato soup.  Some people eat it like salsa and dip corn chips in it, or as a relish on hamburgers and hot dogs.  I think it would also be good on chicken, steak, or even an omelet.  Regardless, I always look forward to “chili sauce season”, whether I am visiting PA, or receiving a care package in CA.

Now, I have always been intimidated by canning.  I had vague memories from my childhood of my mom in the steamy kitchen, with the grinder bolted to the the table, warning me not to touch the peppers because it would burn if I rubbed my eyes.  I think in those days she put the jars in boiling water to seal them.  However, after recently talking to my mom and my sister, who makes and cans her own very delicious jam all the time, it seems my fears are unfounded.  Apparently, all you need to do is sterilize the jars, add the hot sauce or jam, then quickly add the lid seal and tap it once or twice until it makes a “twowk” sound that lets you know the air is sucked out and the seal has been formed.  Then you just twist the band tightly, and you are done.  This is apparently called “hot packing.”  I don’t know how well this process works for other foods, but it works just fine for jam and chili sauce.

A little rant: I have been reading a lot recently about “hipsters” who are getting into canning and other “vintage” activities, and how it is pretentious because people can just go to stores now.  The other argument against home canning is that it difficult and expensive.  Ok, vegetables can be expensive, but if you grow your own, this is a great way to make your crop last longer (and not have to eat tomatoes every day so that none go to waste.)  Plus, you can re-use the jars over and over, which is way better than filling up landfills, in my opinion.  Alright, I am done ranting now.

As far as difficulty, I guess that depends on your exposure to canning.  For example, my mom  has very fond memories of her Lithuanian-American grandmother’s basement, which had  7 ft. x 7 ft. shelves loaded with jars of “every color of the rainbow.”  My great-grandmother, who was alive until I was 10, would can EVERYTHING from pie filling to vegetables to save time and money.  If she was making a pie that day, she’d just run down to the basement and grab a jar.  Easy peasy.  So maybe there is some genetic/word-of-mouth/watching the elders aspect of canning that makes it seem so easy when my mom and sister talk about it.  Although I myself am not much of a canner, I know enough people who have been doing it regularly for my entire life that it is as much of a tradition for me as making pierogies or celebrating Christmas.  None of the canners I know are wealthy, pretentious people or hipsters with too much time on their hands.  In fact, it is quite the opposite.  Sure, you may lose a few hours of TV watching time on a Saturday to make enough jam to last you through the winter and have enough to share, but is that such a bad thing?

More importantly, I prefer home canned foods, which are pretty much always made with fruits and vegetables straight from the garden, woods, or the farm stand.  If you have never eaten a tomato straight from the vine or a blueberry right off the bush, you do not know what you are missing.  Supermarket blueberries and tomatoes may be 3 times larger than their wild or home grown counterparts, but the flavors pale in comparison.  Canning is a great way to enjoy that fresh-from-the-vine flavor well into the winter.

But anyway, back to the canned recipe at hand: chili sauce.  Below is the recipe exactly as it is found in The Lily Wallace New American Cookbook, but my mother has already teased that it doesn’t include her “secret ingredient,” so your mileage may vary.  I will work on finding out the secret ingredient, but in the meantime, enjoy!
Follow my blog with Bloglovin