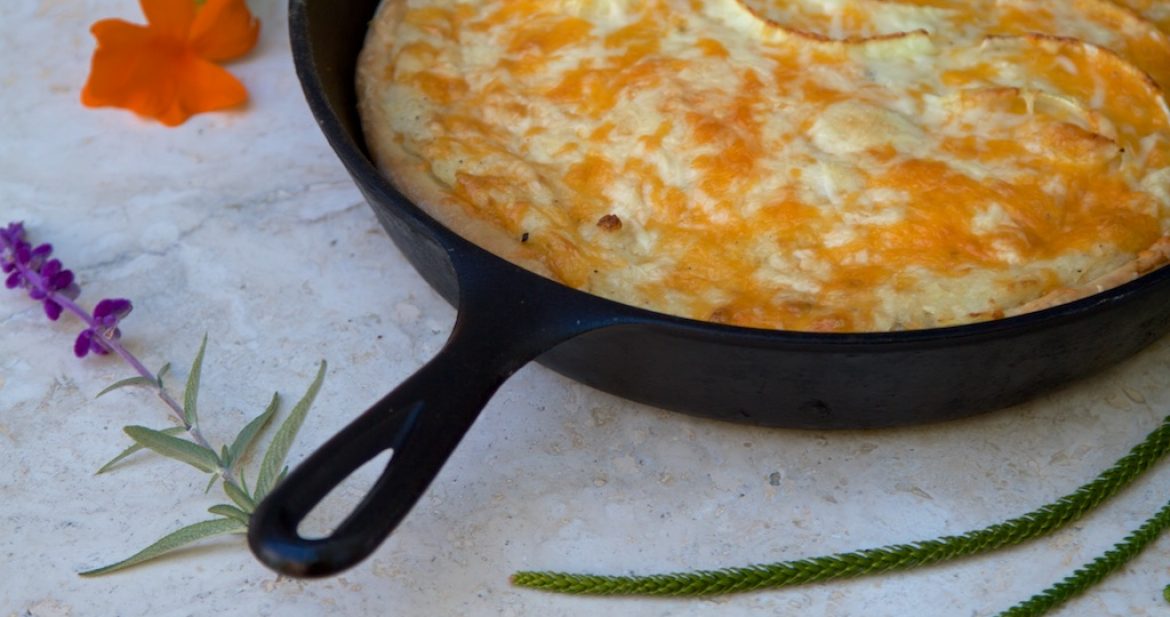 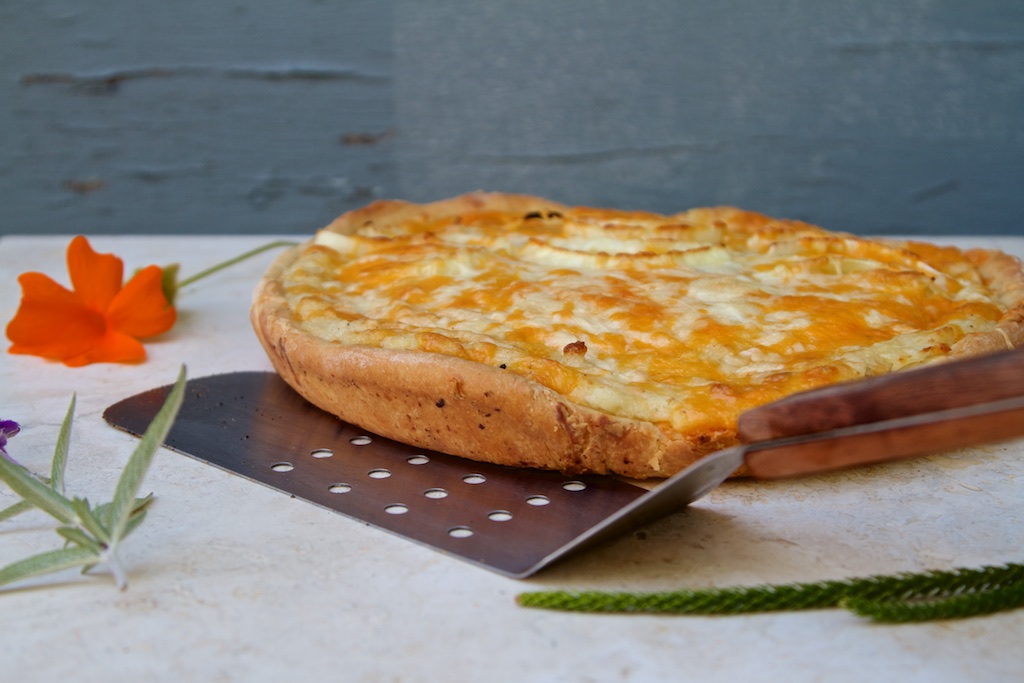 ‘Pag-what now?’ I imagine most of you saying. Having grown up in Northeastern PA, Pagash was a staple of the Lent season, especially on Fridays when Catholics are not supposed to eat meat.

Pagash’s origins are Eastern/Central European as far as I am aware.  There are many spellings for pagash and there doesn’t seem to be a lot of historical information out there online about it.  Essentially it is a thick crust bread/pizza with vegetarian topping or filling. The most popular style of pagash in NEPA is also known as pierogi pizza. This seems to be the Polish variety which has mashed potato, cheese and onions as a topping. I have seen other Slovak/Ukrainian versions online, usually the Pagach spelling, that are stuffed with cabbage or sauerkraut though personally I have never seen these versions myself. There are variants to both kinds that have a top layer of crust, or are made more like a stuffed bread. Whichever the style or the spelling, Pagash is a hearty comfort food that is also easy to make. And it’s a great change from “regular” pizza.

Our version is a variation of the pizza style, and since the Pagash we prefer has a nice thick crust on the bottom, we decided to use the cast iron pan to give it a deep dish pizza feel.

Once you have the dough made, roll it out large enough to cover the bottom of the cast iron pan, as well as inch or so up the side of the pan. As you can see from the photos precision is not important 🙂 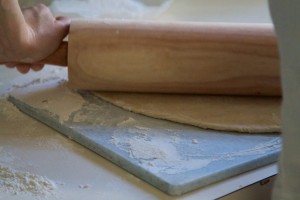 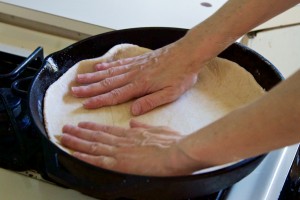 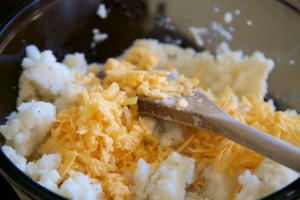 While that is baking we added a handful of the shredded cheese to the mashed potato and mixed it through, along with some salt and pepper. Most cheeses would probably work great. Cheddar is pretty standard. Many call for sharp cheddar which would add a nice bite to this carb heavy food. We ended up using a blend of cheddar and asiago because we had it. 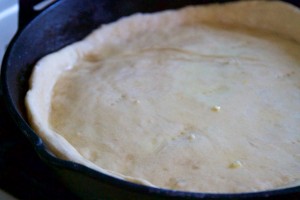 Once we pull pan out of the oven we let it cool for a couple minutes and then we can begin to build. First we brushed the whole crust with garlic butter. I’m not sure I’ve seen this in many of the recipes online, but wow did it add an amazing flavor.

Then add the mashed potato mix to the crust and spread it out to a even layer about 3/4 in thick. Then add your onion layer. We used pieces of sliced onion and only added it to half the pizza since I am not a big fan of whole onions. You could also finely chop the onions and add a layer or mix it in. Traditionally I remember always seeing large pieces of onion though. 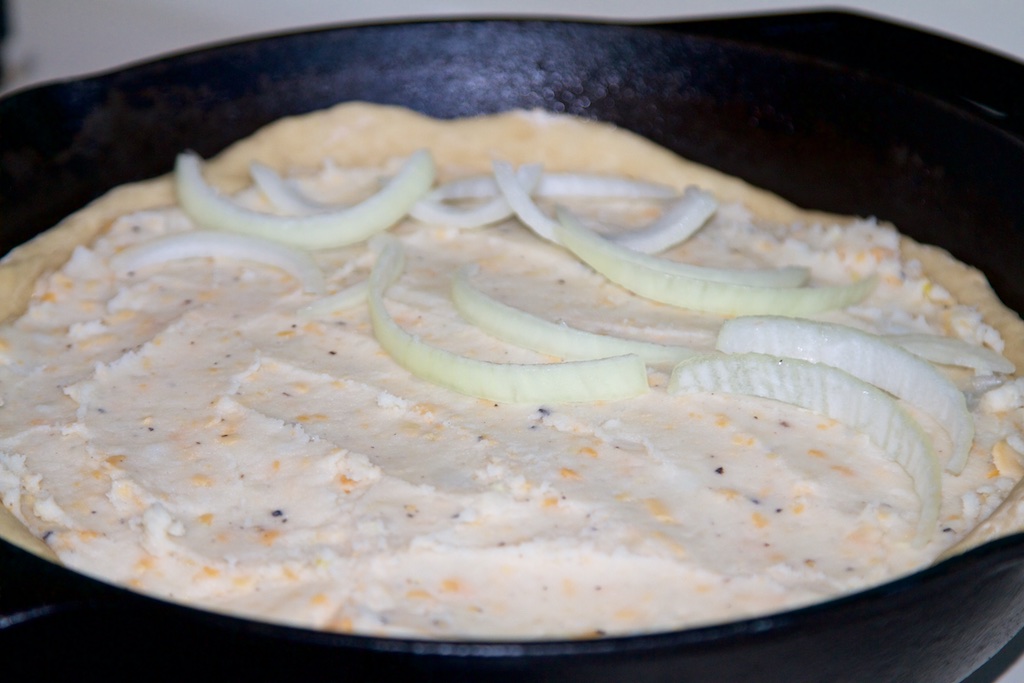 All thats left to do now is to generously top with your shredded cheese and bake it in the over until everything melts together and becomes amazing. 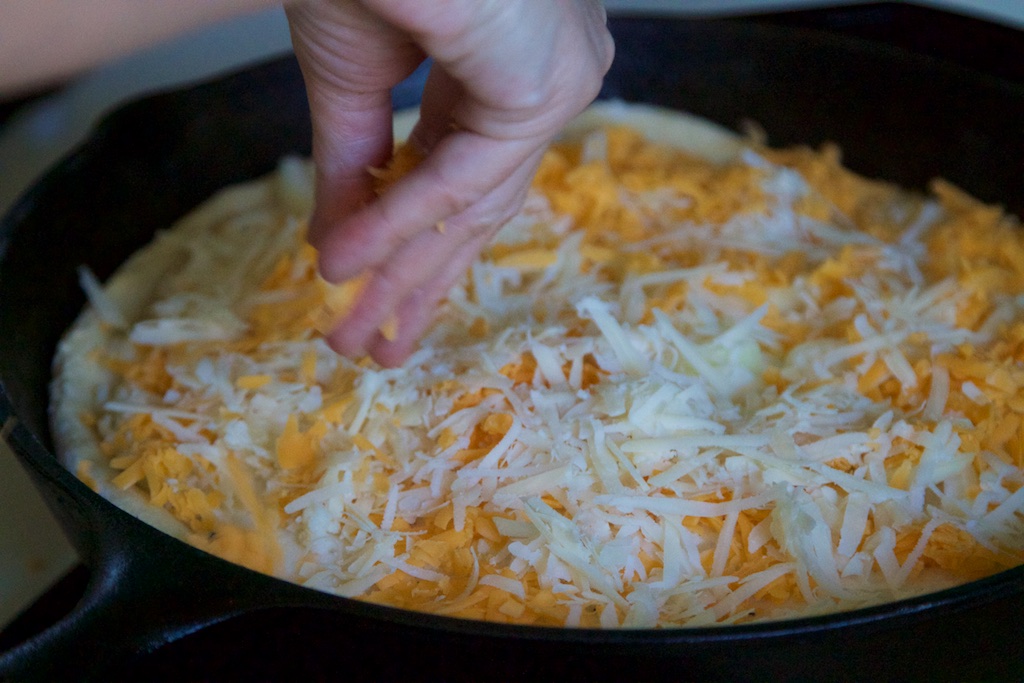 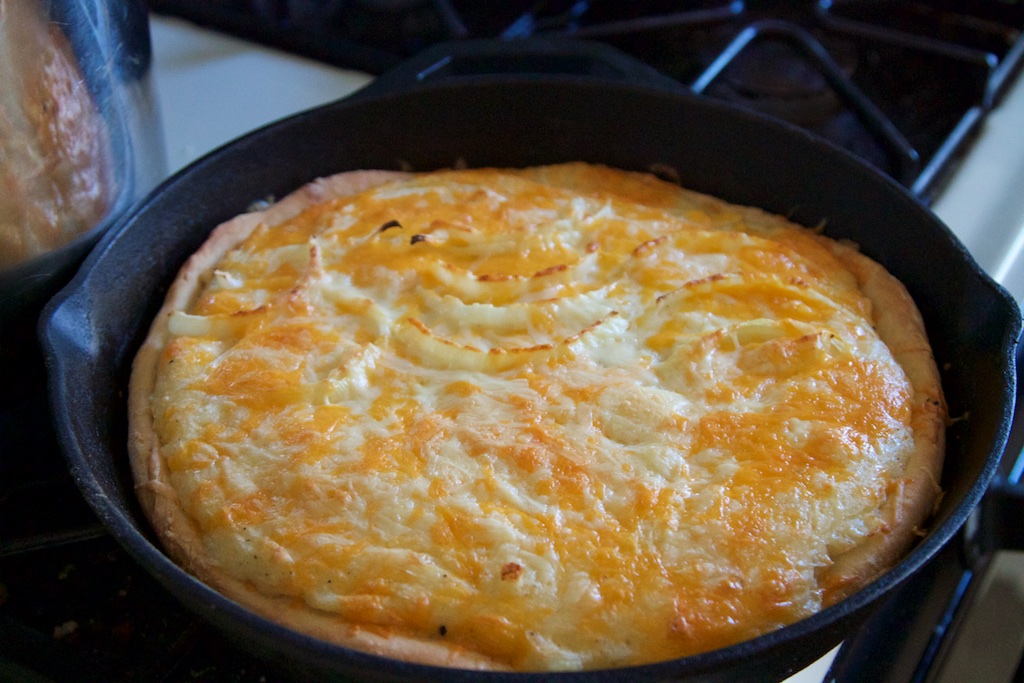 Oh man was this Pagash delicious. We couldn’t stop eating it. We also kept discussing how much adding bacon to it would be amazing, but that kinda kills the whole no meat thing that originally prompted the creation of this dish. However for any other time of the year, or if Lent is not your bag then have at it. I think that would rock. 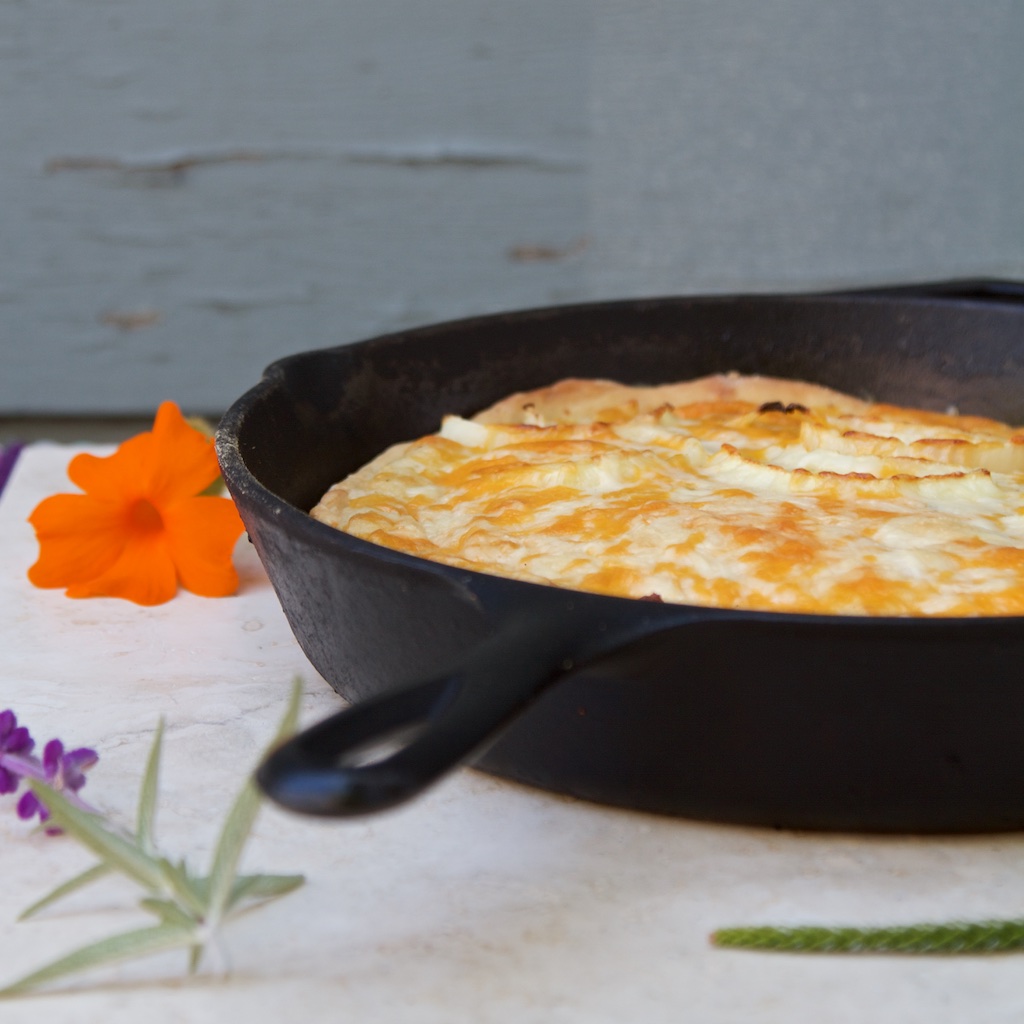 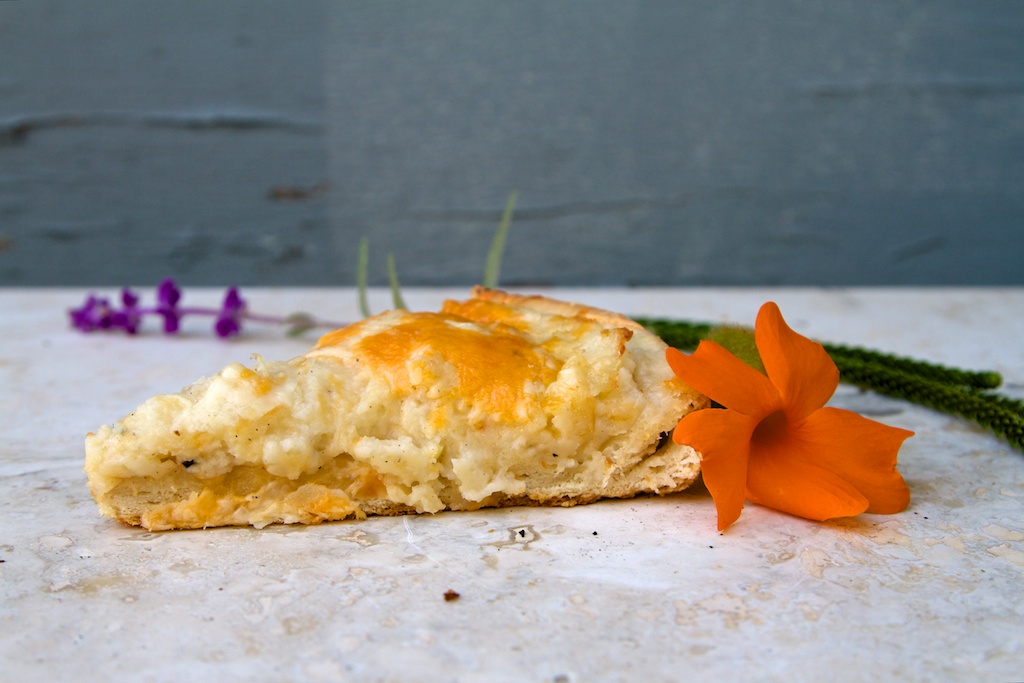 I realize we are getting this recipe out there just under the wire in terms of Lent usage, but there is still one more Friday to go… so try it and make your Good Friday a Great Friday!

Postmortem: I have seen recipes that added a layer of cheese to the crust before the mashed potato layer. I think I might try that next time in order to glue the potato layer firmly to the crust. The potato had a tendency to want to slide off the crust so that might be a good solution. 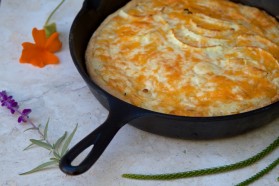