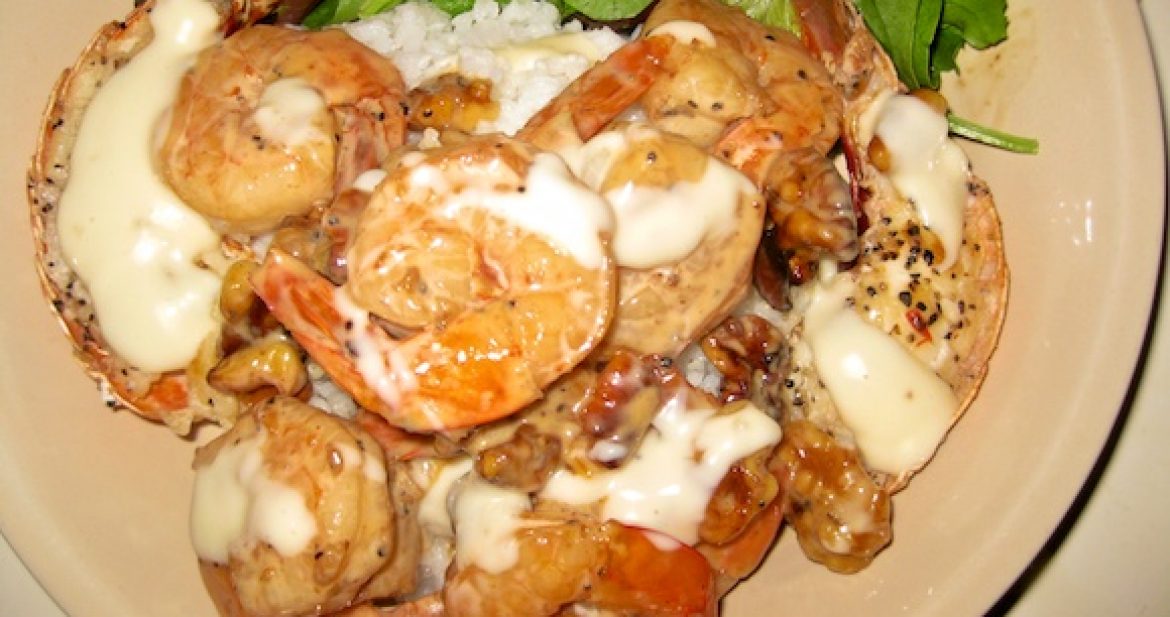 Oh, the meals a giant bag of walnuts from Costco can inspire!  I was rustling through the cabinets on Saturday night, trying to whip up something to eat that: 1) would erase the memory of the gross Hawaiian BBQ take out we had for our Friday “date night”; and 2) would not require me to go to the grocery store.  I found the walnuts and thought, “Honey Walnut Shrimp”, which was immediately followed by the thought, “But we don’t have shrimp!”  More scrounging, and I found a container of tofu in the fridge.  “What would you think about honey walnut tofu for dinner?” I asked B.  “Why don’t I just run to the store and get some shrimp?”  he responded.  Alright!  Problem solved!

I did the prep work while he got ready to go to the store.  Although all the recipes I had read said to boil the walnuts, then sugar them and lay them on parchment paper to dry, I had discovered my own baked candied walnut solution a few days before, so I did it “my way.”  All I really did was melt some butter, sprinkle a bunch of sugar on the walnuts, then mix the butter in to coat well, spread the coated walnuts flat on a cookie sheet and bake for about 5 minutes at 400.  I try to spread the walnuts apart after removing them from the oven so they don’t cool into one big clump.

Since it was my first attempt at making honey walnut shrimp, I compared a bunch of recipes about how to make the sauce.  There were a couple of variations here and there, but it seemed like condensed milk, mayonnaise, and honey were the main ingredients.  Luckily, I had all those items on hand.  I did see recipes mention adding lemon juice, but I didn’t have any, and I had already deviated from the recipe with preparation of the walnuts, so I  knew this probably wasn’t going to taste exactly like the honey walnut shrimp you get in a restaurant.

The arrival of the shrimp brought with it a surprise: two 4 oz.  lobster tails.  B figured I could just pan fry them like I was planning to fry the shrimp (another deviation from the flour battered and fried shrimp the recipes indicated.  I am not a huge fan of deep frying.)  I had only ever steamed or broiled (usually broiled) lobster in the past, and I had no idea if pan frying them was a good idea.  So then I started with the googling, which lead to discovering the recommendation to “butterfly” the lobster, which lead to the debacle of me trying to pry the meat away from the shell while still leaving it connected and having no luck whatsoever, which finally lead to B. taking over to cut the Gordian knot, ie., simply cutting the lobster tails in half.  From that point they were actually pretty easy to pan fry.  I placed them meat-side down in the pan, added a splash of water, covered the pan and let them cook for 4 minutes, then flipped them, added a splash more water, then covered for another 4 minutes.  They were only seasoned with salt and pepper, but we were quite pleased with the results.

We prepared our plates a little differently (he basically created a giant honey walnut shrimp and lobster salad; I had my shrimp and lobster over rice with my salad on the side) but we both thought it was REALLY good.  Even without the lemon juice, the sauce was ridiculously tasty.  So tasty that we saved some and used it with chicken the next day.  I am glad I made a lot of sauce.