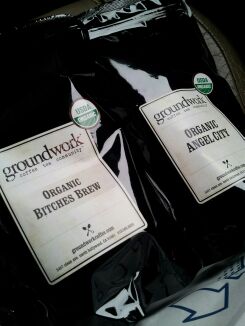 I discovered Groundwork Coffee’s Angel City organic blend coffee a few months ago, and as I drink my morning cup right now, it is probably fair to say I am hooked on this coffee.  I have also tried their Bitches Brew, which is darker and has a more intense flavor, but I prefer the mellowness of Angel City.  I get a ridiculous amount of enjoyment out of the entire process of making coffee in the morning, from putting the kettle on to boil, to grinding the beans, to filling the French press.  And of course, finally filling my cup and having that first sip. 🙂

Speaking of French presses, a few years ago when I got my first Bodum, I was very excited and started to tell a friend about it.  This friend was French.  Apparently the French do not refer to it as a French press, much like Canadian bacon is just plain bacon in Canada.