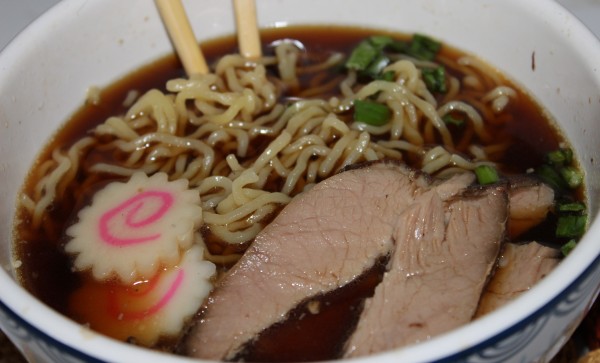 So its been a good long while since I’ve written anything here and much has changed.  For starters, I am no longer a vegan or vegetarian (not for any real reason). The recipe I’m going to share with you today is what got me off the track about a year or so ago, and I just never jumped back on.  Wagons aren’t really my thing.  Anyway, on to today’s topic.

As the title of this post proudly proclaims, I absolutely love Ramen.

There is something magical about this noodle soup that is very hard to describe.  There’s no set in stone style or recipe to it, the dish varies incredibly from region to region.  While it’s most popular in Japan, it has been making inroads here in the states as well.  Obviously, most of us are familiar with the instant version that we all depended on in college because we couldn’t afford anything else, but real ramen is something of a totally different animal.  With a complexity of flavor and simple ingredients, a good ramen evokes wonderment and warmth in layers.

I spent a solid 8 months working out my own ramen recipe and while its not traditional in the least, or as complex as the ramen of Japan, I think it is a decent and fairly easy to make variant that takes a little less time and has easier to find ingredients.  My ramen broth is a pork broth made from neck bones (very easy to find and extremely cheap), some common vegetables, bonito flakes, sea weed, and then seasoned with a tare.  A tare is just a flavoring added to the finished broth, usually to add some saltiness and intensity.  In our house I like a strong broth whereas Mel prefers just the base broth which is why the recipe lists adding the tare to individual bowls but you can just as easily add it to the whole pot..   Typically I serve it topped with thin sliced Char Siu, a chinese style roast pork shoulder which will be a post in and of itself soon.  Other common toppings I use are grilled bok choy, mung bean sprouts, naruto fish cake and occasionally a soft boiled egg.  Toppings can be really whatever you like so go crazy with it.

The only things I don’t really include are the noodles themselves.  Sometimes I make them by hand and other times I will use store bought instant because I’m feeling lazy.  I leave the decision of noodles up to you- there are plenty of recipes in the wild for hand pulled or hand cut noodles which tend to be best, but if you don’t want to do that much work then instant is usually fine.  If you are lucky enough to have a store nearby that caters to these kinds of things, you can pick up fresh noodles. I like them thick and chewy myself.

This is one of my favorite recipes and make it often on Sunday afternoons when I’m working around the house or in the yard.  Give this a try sometime and I’m sure you’ll never want to use those horrifyingly unhealthy flavor packets again.

Pork Bones after roasting for an hour 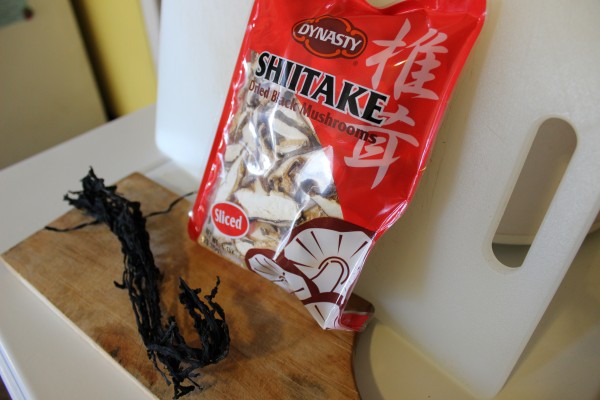 Dried Shiitake mushrooms and Wakame, kombu is the sea weed that is recommended but can sometimes be difficult to source locally 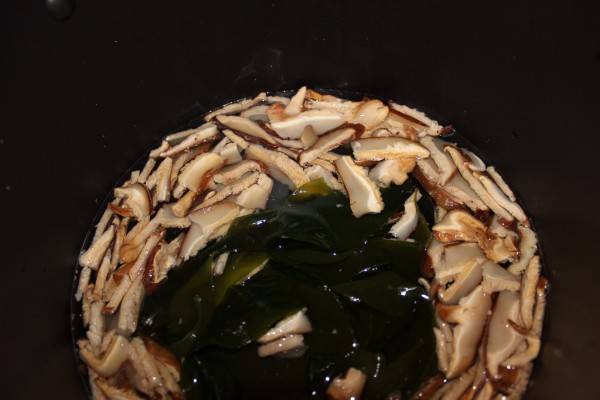 Once strained this will be a dashi, the base of our soup and what we get from very low simmered seaweed and shiitake 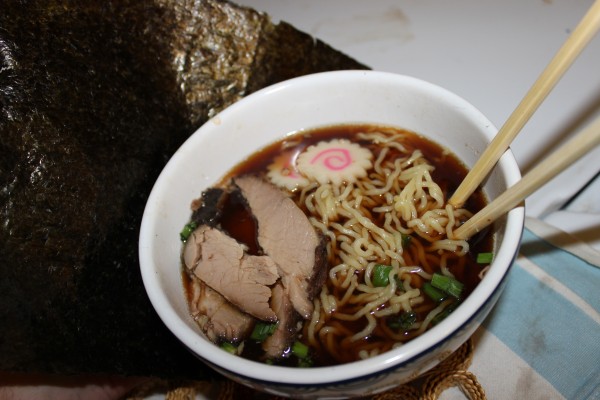 Our Glorious Finished Product! Served with Char Siu, fish cake, scallions and a sheet of Nori