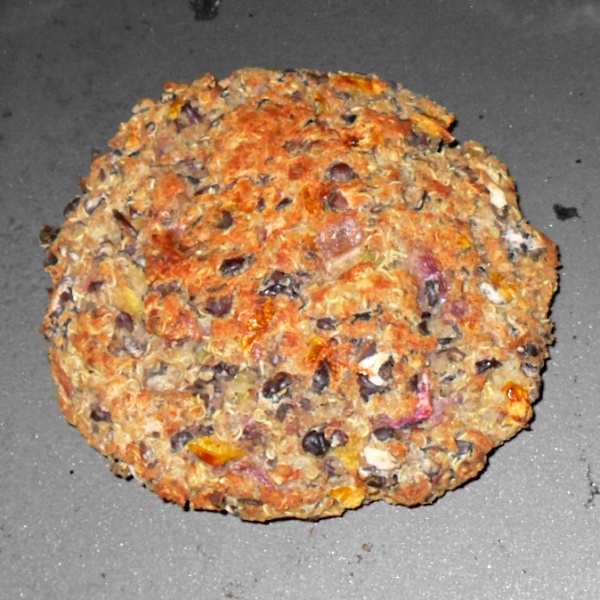 “Beans are neither fruit, nor musical.” -Bart Simpson

You may remember that I mentioned M’s disgusting-looking bean patties in Shitake Just Got Real (or at least the meatball version of them). He made them again and he swears they are delicious, so here is the recipe for all you vegans out there. The original recipe was from allrecipes, but of course, M changed it up considerably. I am going to try a bite of one. I don’t eat regular burgers (not for any noble reason, just because I really hate the taste of them) so I don’t know if I am going to dig these or not. A little wiki info for those of you (like me) who don’t know that much about quinoa:

…a species of goosefoot (Chenopodium), is a grain-like crop grown primarily for its edible seeds… Quinoa seeds contain essential amino acids like lysine and good quantities of phosphorus, and magnesium…Quinoa is considered a superfood. Protein content is very high (14% by mass), yet not as high as most beans and legumes. Nutritional evaluations indicate that it is a source of complete protein. Furthermore, it is a good source of dietary fiber and iron. Quinoa is also a source of calcium, and thus is useful for vegans and those who are lactose intolerant. Quinoa is gluten-free and considered easy to digest…Quinoa seeds are in general cooked the same way as rice and can be used in a wide range of dishes…

So super good for you, and if you can cook rice, you can cook quinoa. Which I can’t. But that’s a story for another post….Anyhow, he paired these vegan burgers with Flying Dog’s Raging Bitch Belgian Style IPA (which has awesome artwork by Ralph Steadman on the label). This recipe makes what he calls, “Six big ass patties”. We made 3 and froze 3. 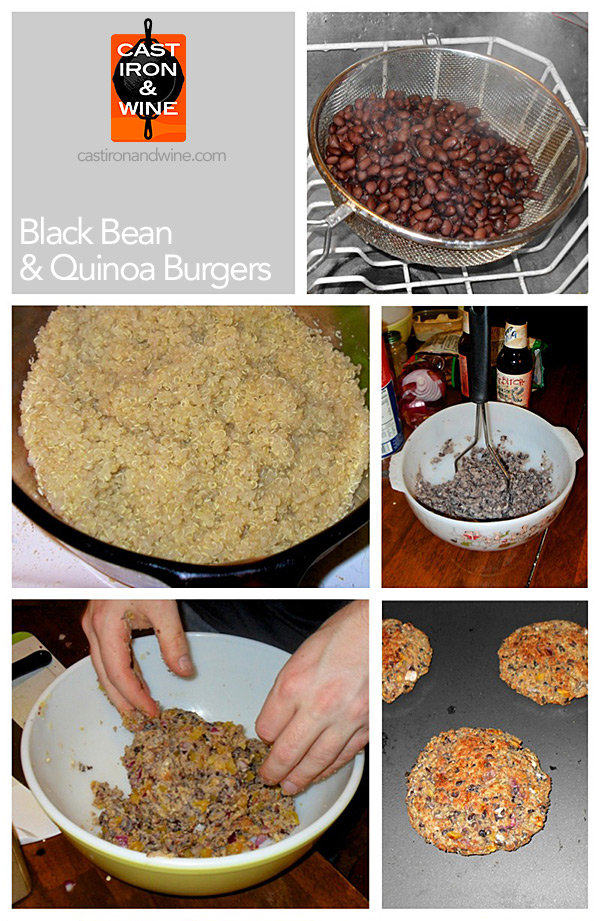 My verdict: I cannot believe I am going to say this…These were wonderful! They were kind of crunchy on the outside and moist on the inside and they tasted like samosas from the Indian restaurant. Not at all what I thought they were going to taste like. Seriously. Wow. I said I was going to take a teeny bite, but I went to town on that thing. He had his on a toasted whole wheat Arnold sandwich thin with some organic Heinz ketchup (which I did not know was even a thing). I just ate mine plain, with a fork. I didn’t think it needed anything. Though I can never give up my beloved chicken, I am definitely ok with eating more vegan stuff like this. What is happening to me???