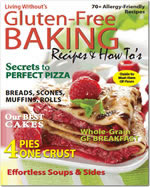 We received two great surprises in the mail this week…

The first is Living Without magazine’s Gluten-Free Baking Recipes and How-To’s:

This is the first issue to arrive (of the 2 gluten free magazine subscriptions given to me by our dear Richard for my birthday).

I am especially excited to try out the gluten-free yeast bread recipes.  Although I generally try to avoid making anything that requires xanthan gum, I will make some exceptions in order to try some of the amazing-looking recipes in this magazine.  If anyone knows of a cheaper substitute for xanthan gum, though, please let me know in the comments!  That stuff is pricey!

This was a totally unexpected gift sent to us by relatives. The book has a gluten-free/vegan slant (among other things), which is good,  and it was free.. who can argue with that!

I had already read a lot about some of the more ridiculous pieces of text in the book, but I was trying to approach it with an open mind.  That lasted until I flipped the book over to glance at the back cover and saw the picture of GP coyly sucking on a Popsicle.  Um, why???   It was just the first of MANY odd and occasionally confusing photos in the book.  There is Gwyneth sitting on a table while she cuts avocado, because someone’s butt near the food they are about to eat is totally hygienic.  There is also Gwyneth haphazardly holding a giant tray of eggs on her hip.. and a photo of Gwyneth sitting on a scooter, just because.  I don’t own a ton of cookbooks (I DO own a Star Wars Cookbook!), but this is the first one I have ever seen that has SO MANY photos of the “chef”… like more photos of GP than the food itself. Odd.

However, all that said, I haven’t even really looked at the recipes in It’s All Good

yet. 😛  I think I will try to test a couple out soon, though I will be using real mayonnaise instead of the veganaise. Nothing about the word veganaise sound appealing.

Some reviews of It’s All Good:

Anybody have any other good cookbook recommendations?