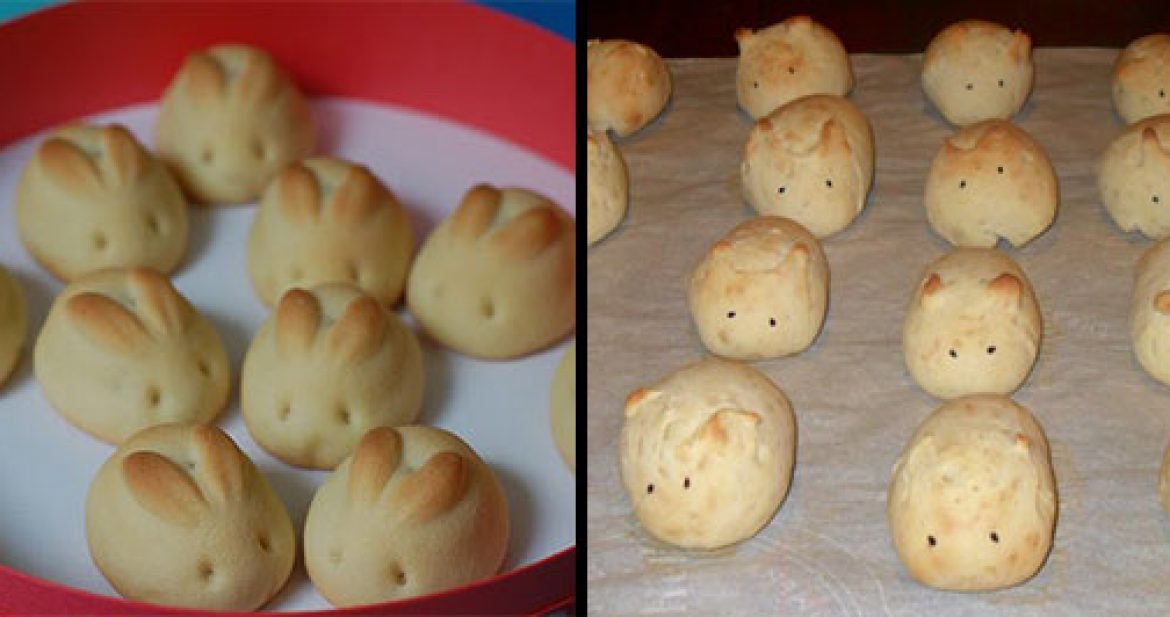 Just in time for Easter, I found these adorable rolls shaped like bunnies that everyone would love on a delightful cooking blog called The Procrastination of Lillian Maxwell. Somewhere along the line, something went wrong. Very very wrong. Maybe there are gamma rays in our kitchen, maybe it’s located in the middle of a mystical vortex, I don’t know. But I ended up with an army of bread hamsters.

This post should serve as more of a “what not to do” than anything else. Luckily, I think I can pinpoint where it all went so wrong: The original recipe says that it makes 16, but I would change that to 20. More of them at a smaller size would have worked better. More importantly, take the time to work on the ears! My late-night, half-assed assembly just did not cut it.

Weird looks aside, they did taste delicious when they came out of the oven. The sour cream adds a flavor reminiscent of a Pillsbury breadstick dough. Mmmmmm. I scarfed down 2 immediately and brought the rest to work for ridicule. Just covering them in a bowl with saran wrap kept them soft and fresh (though they do taste best right out of the oven). If you are making these for Easter dinner, make sure to give yourself a few hours. Letting the sour cream, water, and butter combo cool after heating and letting the dough rise are both time consuming.

Looking at these sad, sad culinary abortions (in the words of Stewie Griffin) got me thinking about the relationship between the traditional Christian holiday and an egg-laying rabbit. It is just as confusing to me as the rules of Lent, so I did some research (mostly on wikipedia).  The origin of the Easter Bunny itself can be traced back to 13th-century, pre-Christian Germany, when people worshiped several gods and goddesses. Eostra (or Ostara) was the goddess of spring and fertility, and her symbol was the rabbit due to the animal’s high reproduction rate. Rabbits and eggs have been symbols of fertility through the ages, and spring has traditionally been viewed as a time of new life and rebirth. When Roman Catholicism became the dominant religion in Germany in the 15th century, it merged with already ingrained pagan beliefs. The Easter Bunny was first mentioned in George Franck von Franknau’s “De ovis paschalibus” (About Easter Eggs) in 1682 referring to an Alsace tradition of an Easter Hare (“Osterhase”) bringing Easter Eggs. These stories were brought to the United States in the 1700s, when German immigrants settled in Pennsylvania Dutch country. He brought only good children gifts of colored eggs in the nests that they made in their hats, which over time became decorated baskets filled with colored eggs and chocolates. Side note: every year I got the same chocolate bunny in my basket and it’s name (on the package) was Henrietta Heffleflopper. I loved that bunny.

Though I’m sure the goddess did not have this in mind, I would LOVE to find it in my Easter basket, the
chocolate zombie bunny from thinkgeek.