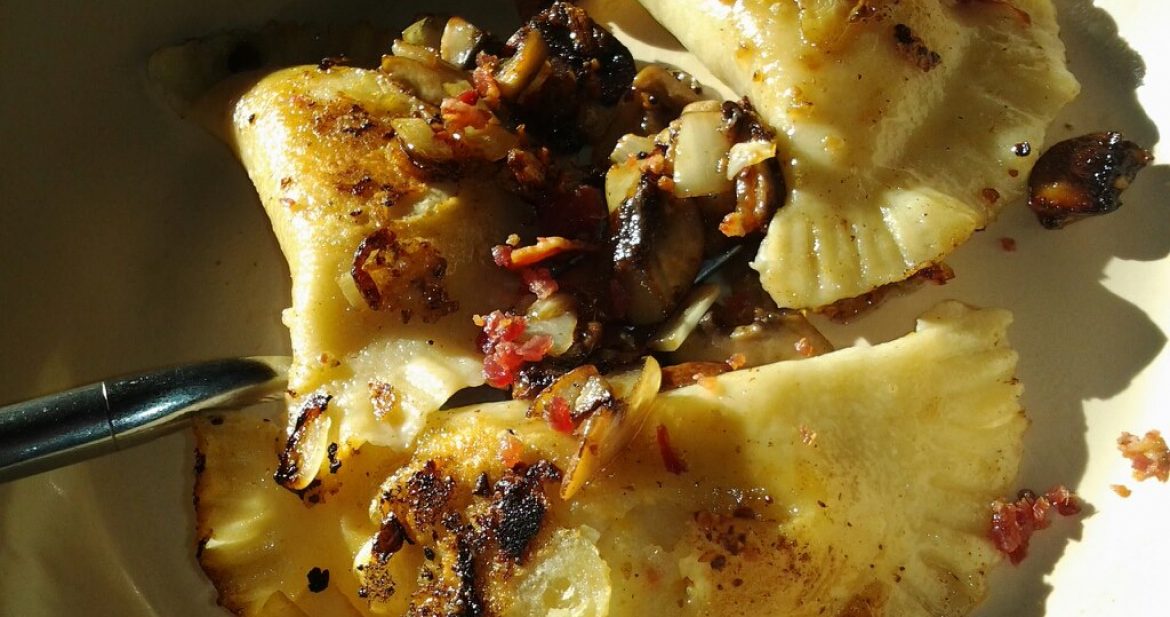 For the past few years, Mel and I have been either attending or having a “Pierogi Party” in the weeks before Christmas (barring unexpected illnesses and inclement weather).  We both grew up eating frozen pierogies year-round, but there was always something special about the homemade pierogies of the holiday seasons.  After a lot of conversations with different people about how they make their pierogies (triangle vs. half-circle, water vs. milk, how much salt, etc.), research into heirloom recipes, and hours and hours of practice making dough, I think we have both come to the point where we can whip up our ideal pierogies from memory.   Possibly in our sleep.

In theory, pierogies are not complicated.   The ingredients are simple and easy to find,  and there really are only a few steps.  However, they are time-consuming and require a big commitment, because once you get into the process, you have to just see it through.  You don’t want to be answering your phone when you are covered in flour and have dough on your hands.   The dough is really the thing that makes or breaks the pierogies, in my opinion.  Great tips we have received regarding the dough include: kneading it until it forms a ball that is “as soft as a baby’s bottom”; rolling it thin enough so that you can see light shining through if you hold it up, but thick enough to hold filling and stretch a little, and breaking the initial dough into half or thirds before rolling it out because it is easier to handle.

Although most recently I have been using a filling mixture of potato, bacon, and cheese due to frequent requests, you can use just about any filling you like.   I have a batch of dessert pierogies filled with strawberry preserves in my freezer, along with a half dozen potato, spinach, and feta, and I once even made 6 Nutella-filled pierogies (which were quickly devoured.)  The possibilities are almost limitless.

I find that this recipe for pierogi dough is a pretty good start for making pierogies.  Below are my slight modifications: