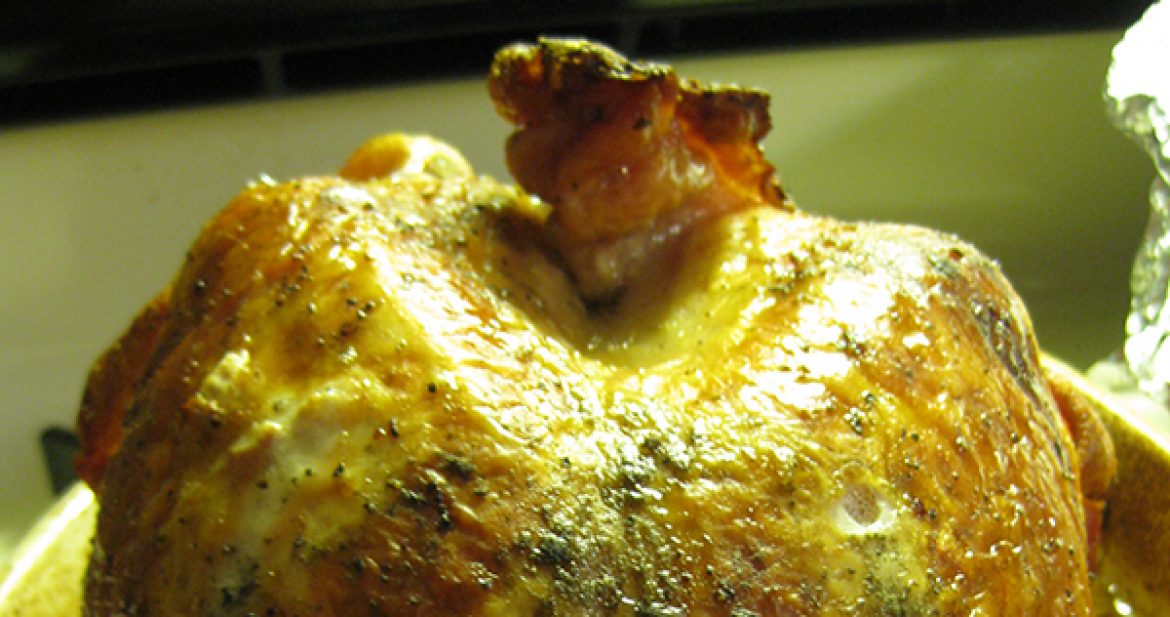 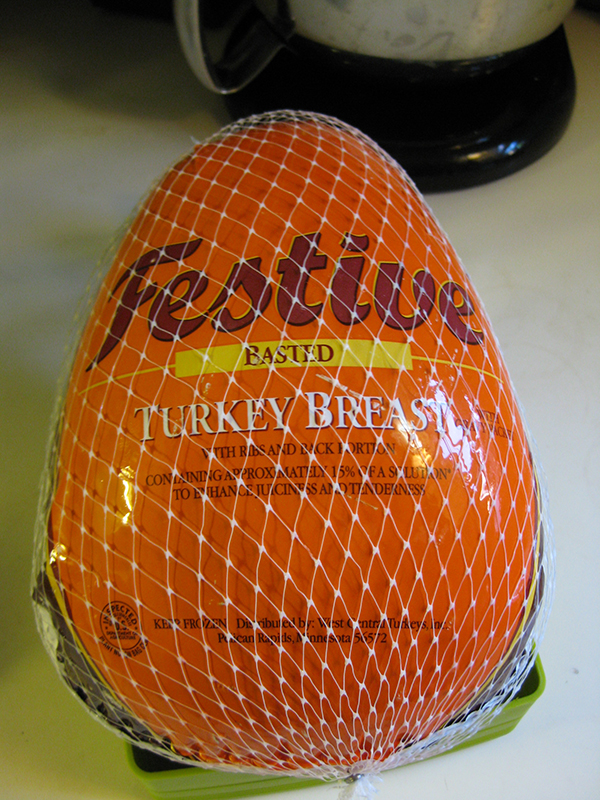 Today, for the first time EVER in my four decades on this planet, I am attempting to make a (frozen) turkey (and apparently, a Festive one!)   So this post is going to serve as a sort of live blogging/recapping hybrid experiment as a way to a) help me remember whatever I end up doing in case it turns out well, and b) document my mistakes if it turns outs a miserable failure.   I cannot guarantee any consistency in the time frame of the documentation because this whole process is new to me and I am just winging it. (Bird pun!  Badum-bum!)

Now, there are many reasons I have never made turkey before, but the number one reason is that I simply do not like the meat.  I have had it prepared a number of ways that have been tasty and edible, but given the choice between eating turkey and not eating turkey, I would prefer to NOT eat turkey.   I eat other birds, like chickens and ducks, so I am not sure if is the texture or the overall flavor of the turkey meat, but something about it just does not do it for me.  I don’t judge anyone else for liking turkey, I don’t make weird faces when other people eat it, I even understand that most people find it quite delicious.  Turkey is just not my thing.

However, this particular idiosyncrasy of mine seems to really bother and sometimes even upset people.  It’s like, “What do you mean you don’t like turkey?!?  How could you NOT like turkey?!?”  Or even worse, “Well, I don’t want to get a turkey if you’re not even going to eat it too…” (Cue puppy dog eyes and guilt trip soundtrack.)  So I will try to meet this fowl halfway, and learn to at least cook a decent turkey.  Then when people start clutching their pearls when I say I don’t like turkey, I can follow it up with, “But I can cook a (hopefully edible) turkey!”  Maybe that will ease some of the disappointment.

Anyway, getting down to brass tacks:  this particular turkey breast is 7.85 lbs., and the instructions on the packaging say to roast it at 325 degrees F at a time of 20 minutes per pound, so in my case, this bird should be cooking for 2.6 hours.  B suggested that I knock the temperature down to 300 and cook it a little longer, and since he will be the one primarily eating the turkey, I am following his suggestion.

I poked around at some turkey recipes online, and noticed many of them call for carrots and celery, which for some reason we are out of (we buy the giant 10 lb. bags of carrots at Costco…it seriously seems like you have a fridge full of carrots for weeks, then one day, they are just all gone!)  I was seriously stunned not to find a single carrot today, but I am not going back to the grocery store, so I am going to improvise.  I found a recipe for Apple-Sage Brined Turkey Breast which sounds good in theory,  but it calls for brining the turkey.   Yeah, no, that sucker is getting cooked today.  However, in the future, I will try to plan ahead so I can brine the bird overnight and see what exactly that all does.

The brining imperative aside, I have apples and I have sage, so that is something I have going for me.  A last minute scrounge through the fridge, and I decided to add some chopped red onions and butter to all that in my efforts to create a bed for the turkey breast in my big Le Creuset pan.  I have used apples with roast chicken before and it always turns out awesome, so it seems like they should work with turkey too. 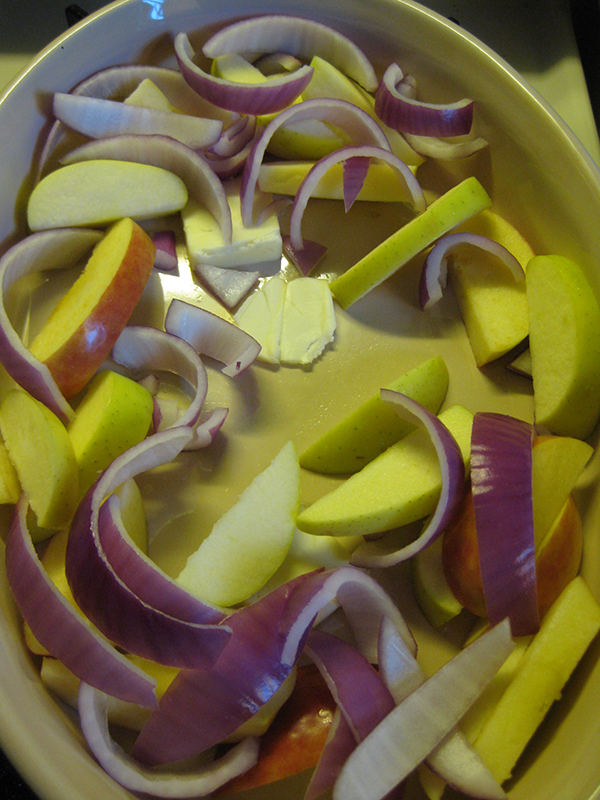 Now, the butter presented its own dilemma.  It is all fine and dandy to put a few tabs of butter in the roasting pan, but many of the recipes I was reading said to rub butter under the skin and on top of the skin.  I have done this process with chickens, and while it is relatively icky in that context, I can usually rally and get it done.  Not so with the turkey.  I don’t know if the skin seemed more attached somehow, or if it was the fact that I borrowed Andrea Bocelli’s Opera – The Ultimate Collection from the library and decided that making dinner was the perfect time to listen to it, but I all of a sudden felt like I was in a Hannibal Lector scenario that was mildly unsettling.  At any rate, I only got butter under the skin on one side of the breast (I can almost hear Richard calling it a “Turkey Boob”) and called it a day. 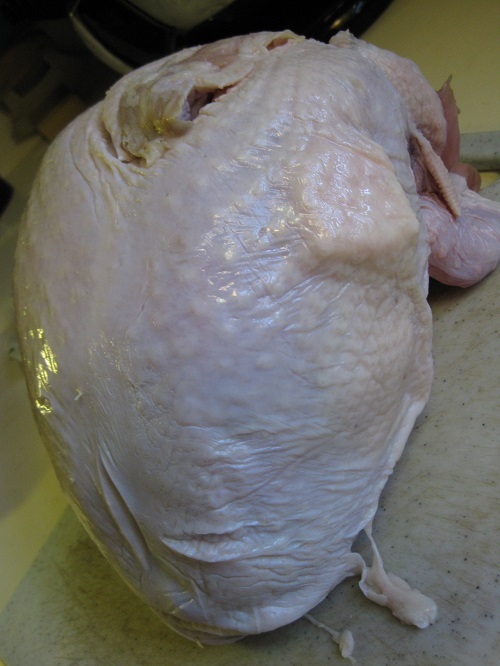 My attempts to rub butter on the outside of the skin weren’t any more effective.  I eventually gave up and just sort of pressed the pats of butter down until they stuck.   Oh, I also sprinkled salt, pepper, and sage on the turkey before dealing with the butter. 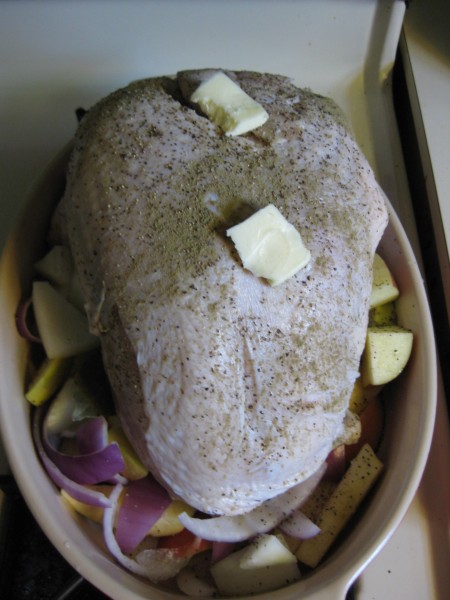 Before the bird went into the pan, I had to deal with the issue of the cavity. Mentally I was expecting just a large round hunk of breast meat cut off a turkey without the entire rib cage in tact, as normally I don’t cook whole birds, so the cavity was quite a surprise to me.  No, I did not read the packaging very well. 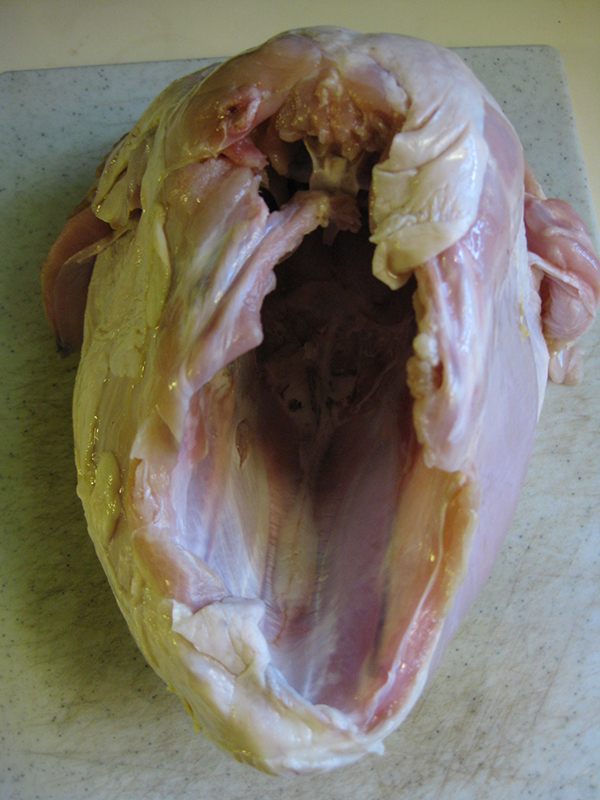 And since I have no carrots or celery with which to attempt a bread stuffing, I decided to carry the apple and onion theme over to the cavity. 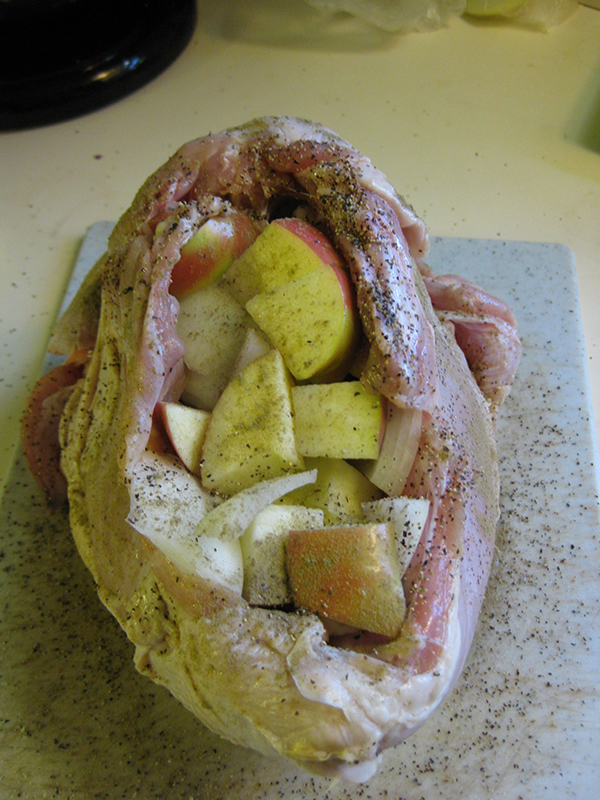 I also sprinkled the turkey with salt, pepper, and sage before flipping it over (I flipped the bird!  HA!) and placing it in the roasting pan.  Then I poured about a half cup of water around the pan, added a bay leaf, covered the pan with aluminum foil, and set it in the oven to do its thing.  It only took about 20 minutes before the entire apartment was smelling amazing.

Time check: 1 Hour
At this point the bird has been in for an hour at 300 deg.  What I am hoping will happen is that the butter will melt and perfectly spread all over the turkey, then it will get a wonderful golden brown hue.

Time check: 2 Hours
The check at the 2 hour window was encouraging, but i forgot to take pictures. Doh.

Time check: 3 Hours
B has gotten home now and the temperature on the meat thermometer at this point is a disappointing 130 deg.  So we are letting it go for another hour.

Time check: 4 Hours
Things are improving at 160 deg on the meat thermometer now, but still not where we want it to be. Hmm. 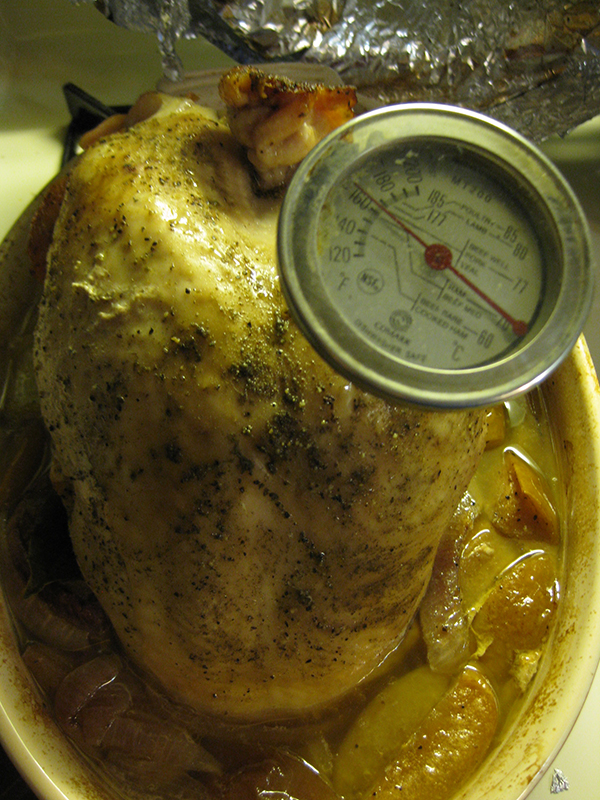 Time check: 5 Hours
Finally(!) after about five hours of total cook time at 300 deg, we have a bird that is ready to eat: 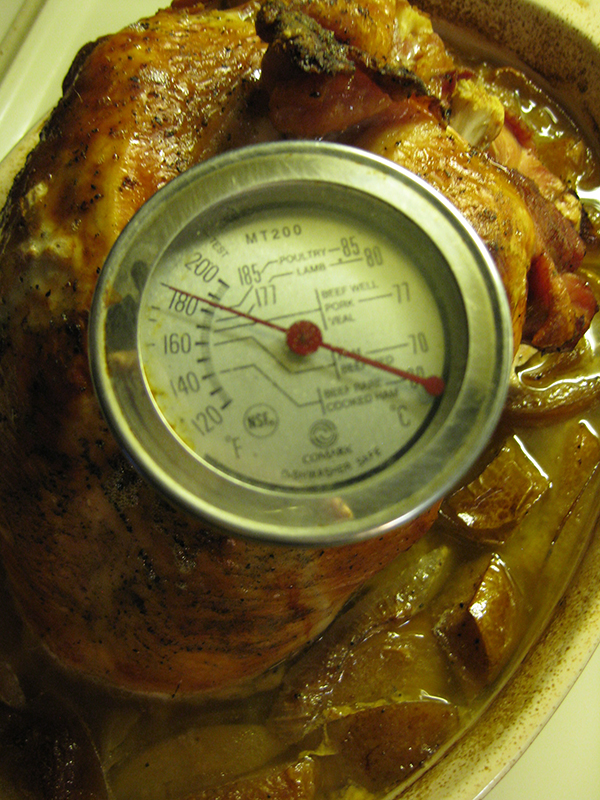 I should mention that we removed the aluminum foil for the last 15-20 minutes so that the skin could get all golden brown. 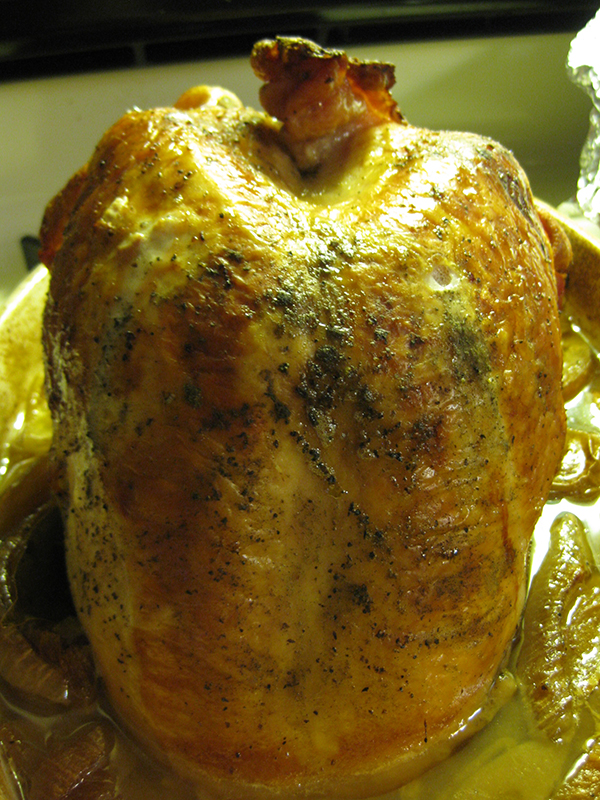 I did not taste the turkey, but B remarked several times, completely unprompted, that it was really good, so I guess I did okay with my first turkey ever.  Yay!

Still not interested in eating the turkey, but cooking it is a good start!