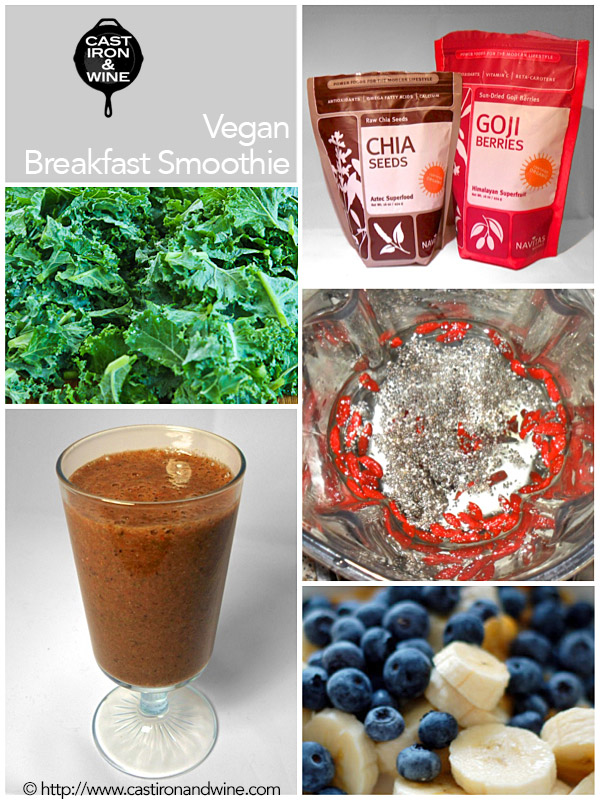 During my last haircut, I asked the stylist what she was using, because it smelled soooooo good. She said it was a product with flax seed in it, and I said,”Wow, that’s what my husband puts in his breakfast smoothies.” She laughed awkwardly and we settled back into the pockets of silence that are customary between new client and hairdresser. When I got home, I had to ask him which benefits attracted him to flaxseed for his daily breakfast shake, so M is a guest editor for this post. Said smoothie is about as attractive as the bean burger from my last post and apparently just as ridiculously healthy. The 7:30am blender usually jolts me out of bed, but we’ve found that there really are no quiet blenders. We had an Oster that was ok but the bottom of the pitcher cracked and leaked after a week and a half. Now we have a beautiful Kitchen Aid 5-speed that sounds like a weed whacker but works like a dream. Back to the smoothie- its usually a thick purpley-grey with with seeds throughout. M usually uses either hemp seeds, chia seeds, or flaxseed, but never more than one per smoothie (hazard of extreme intestinal distress!). He also doesn’t use milk in his smoothies, to keep them vegan. You can substitute if you like.

A little wikipedia info about the nutritional values and benefits of all 3 seeds:

Flaxseed: contains high levels of dietary fiber as well as lignans, an abundance of micronutrients and omega-3 fatty acids…may lower cholesterol levels…may benefit individuals with certain types of breast and prostate cancers…may also lessen the severity of diabetes by stabilizing blood-sugar levels….100g of ground flax seed supplies about 450 calories, 41g of fat, 28g of fiber, and 20g of protein.

Chia seeds: rich in omega-3 fatty acids, since the seeds yield 25–30% extractable oil…a 1 oz (28 gram) serving of chia seeds contains 9g of fat, 5mg of sodium, 11g of dietary fiber and 4g of protein. The seeds also have 18% of the recommended daily intake of calcium, 27% phosphorus and 30% manganese.

Side note: This recipe contains an insane amount of fiber, so consume within decent proximity to a bathroom. Seriously. Also be prepared for a huge boost in energy. M hasn’t had coffee since he started making these, and he’s got way more energy than I ever have. Secret food admission: The texture of a smoothie absolutely horrifies me. Even if the taste is sweet, I cannot get past that dense, seedy liquid. It seems like 99% of all healthy and health-conscious people also have them for breakfast, so I’m pretty sure I am missing something by not drinking them. I’ll always be a work in progress…