So the holidays got us a little off track here, but we are coming back strong. We hope everyone had a great holiday season and got lots of new toys for the kitchen to play with!

First, I wanted to give everyone an overview on some site updates that have happened recently. This post is a bit overdue as these changes were released a few weeks ago, but I still wanted to highlight everything, especially as most of the changes have happened under the hood, with the exception of some slight redesigns which I hope at least some of you have noticed.

We were getting really tired of having the site hacked, no matter how much effort we were putting in to trying to secure everything. It didn’t really make a lot of sense to be hosting this site on my cheap shared hosting I have had forever, so I did a lot of research looking for a new hosting company which was focused on managed wordpress hosting. I had it narrowed down to a couple of companies, but eventually decided to give Siteground a try. Its been a couple of months now and so far I am very happy with them. Its definitely been an improvement on the previous hosting, and no hacking problems so far.

We have redesigned a bit though nothing all that major.

The header bar is probably the most obvious change. I loved the orange but wanted to use the accent colors a bit differently throughout the site. I also wanted to make the site a bit lighter overall so I landed upon this butcher paper idea. I hope to have a little fun with this over the year, but we will see. I think its a bit calmer now. 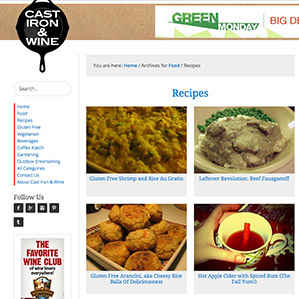 There has also been some layout changes throughout the site, with the intention to funnel everyone down to the individual post pages which are, after all, the most important and meaty pages of the site. There was a bit too much duplication going on. You will see this mostly on the homepage as well as archive and search results pages.

Beyond that a number of small elements here and there have been tweaked, but nothing worth cataloging.

You will now be able to print and save recipes with ease. We have switched from a custom recipe system I originally built to the Easy Recipe plugin which seems to be the standard for recipe formatting on most food blogs I read. So now you don’t have to try to cook while reading your tablet or phone like I do half the time. Its simple to print just by clicking the button on the recipe itself. And if you are a user of Big Oven you can also easily save our recipes to there just by clicking on the save button and following the steps in the window that appears.

We will be using this from here on out, and will update all the previous posts over time to get every recipe in this system.

4. Under the hood improvements

The site has been completely rebuilt on top of the Genesis platform which is incredibly well optimized and has security as one of its top priorities. This should hopefully make the site have the faster load times. And site hackings should hopefully be a thing of the past.

If anyone is interested in the many benefits of having built the site on top the Genesis platform, you can read all the details and features here.

One of the best benefits of this system, leads to next new point:

The site should now be fully responsive and will be leagues better than what everyone on mobile has had to suffer with for the last couple years.

I truly apologize for how bad our mobile experience has been thus far. Fixing that was always on the to-do list, but apparently was stuck there. Rebuilding the site on top of Genesis took care of this simultaneously with very little extra effort.

There are some minor issues I still want to address soon, but overall this is a massive improvement.

So a hearty new welcome to you mobile readers.

There are probably still some small tweaks that will need to happen across the site while we continue to refine things over the next few weeks. If anyone notices anything off, feel free to contact us and lets us know about it. Hopefully you will all enjoy the benefits of these overhauls.

We have a couple of exciting things we are working on that will hopefully add to your experience here. Each will be announced in due time but to give you a bit of a hint we are looking into adding some shopping capabilities to the site as well as looking at some partners in order to offer a Tea shop and possibly something wine related. We will see what pans out.

Here’s to the new year and all the great food that awaits!