The other day we were all having a conversation with each other on the internet machine. It was about what ‘food’ smells each of us have always loved and would want to be made into a cologne/perfume if possible. To be clear, we were NOT AT ALL talking about the sort of crime against humanity that is Eau de Pizza Hut (or that ‘Flame’ body spray I remember hearing about from Burger King). Personally I cannot even believe either exists and I’m really not the least bit interested in even finding out what they actually smell like. What we WERE talking about were the smells that surrounded us growing up, ones that the love of lasts to this day and still evoke strong memories.

It turns out that our tastes overlapped a fair amount which made me wonder if these picks were just the more universal ones or if it was maybe geographically influenced. So we thought that we would make the topic into a post; to tell our stories but also to ask our readers to comment and tell us their thoughts and/or stories. I am interested to see if any patterns emerge.

Here are each of our thoughts on the topic:

Richard: When I was a kid I LOVED the way that celery smelled. I never ate it though… I would never touch it as food. I was a super finicky person… (who am I kidding, I still am), but the smell was intoxicating to me. When my mother would buy some and put it in the vegetable drawer I would inevitably sit there on the kitchen floor with the refrigerator door open, my head in the drawer, drawing in lengthy breaths of it. I distinctly remember I was planning to invent a cologne that smelled exactly like celery. it was to be called “STALK” which I thought was genius at the time. (and probably why I remember it so clearly) I may even have had a bottle design in mind, but I cannot remember one at the moment… I would not have put it past me though to come up with one.

Mel: I also enjoy the smell of celery (A LOT…and the taste), but I really adore the smell of cucumber. I know there are a lot of lotions out there that have some cucumber and melon  in them, but I want straight up, light, clean, cucumber scented perfume. When I was young, my mom would get peel masks from Avon, and we always did the cucumber one together. A little “Grey Gardens,” I admit, but the smell always brings me back to being a little girl. What would I call it, though? KUQ, maybe…but with umlauts! The men’s spicier version could be PIKL. Bottle design might be troublesome though.

Found for sale on Etsy, and I bet it smelled wonderful: 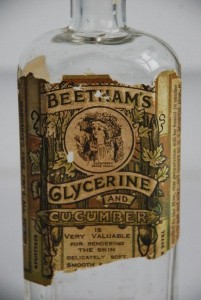 T: I am going to jump on the bandwagon and say that I, too, like the smells of celery and cucumber. My dream food fragrance, though, is freshly cut cilantro. I want a cilantro scented perfume so badly that, a few years ago when I was on a perfume oil kick, I tried to make my own. I found a bunch of instructions online, and it seemed like it would be a relatively easy, although lengthy process. Fast forward a week; to a broken jar, a bunch of green oil on the floor, and a smell like boiled cabbage that was almost impossible to air out of the bathroom. Not at all like freshly cut cilantro. If anyone ever figures out how to make a cilantro-scented perfume, though, I will be all over that. I also think that fresh shiso (aka Japanese Basil) and tarragon would also make delightful perfume scents.

It seems, at least among us, that herbs and vegetables are the winners which makes sense as they are the most fragrant (without getting into the smell of full meals). My suspicion is that this will be somewhat common, but which ones might be the interesting part.

So now, we pose the question to you, tasteful readers: What food would you like made into perfume or cologne and why? Comment below!

Previous Post: « Summertime, and the Living is Easy
Next Post: Who Cut the Cheese? We Did!!! : Cheesemaking Adventures »