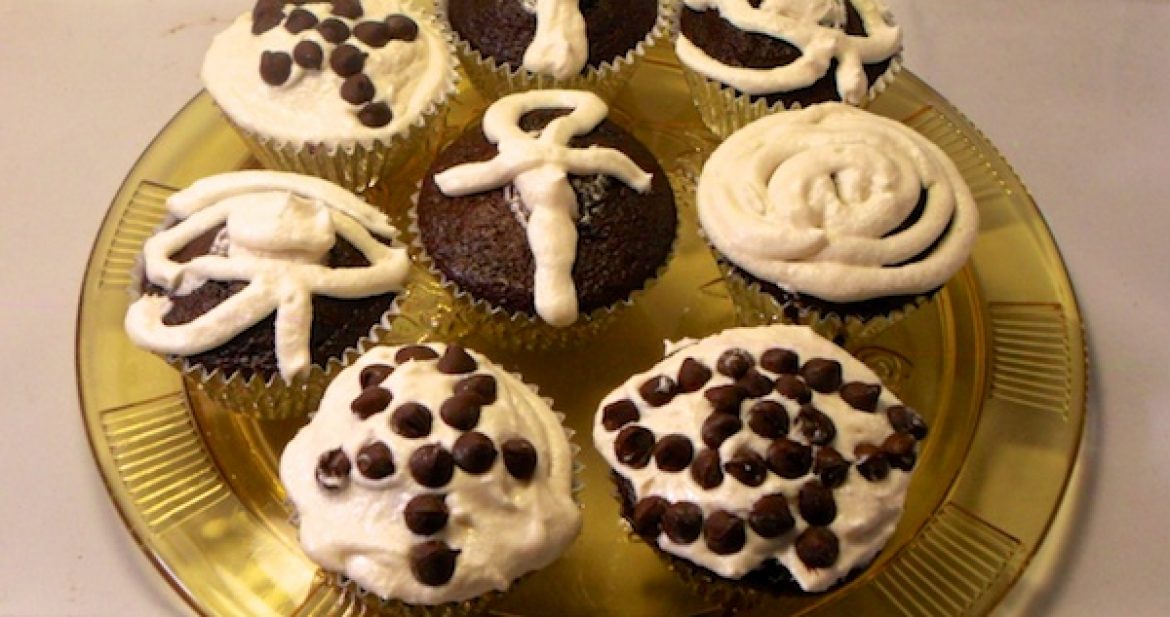 For mother’s day, I thought I would make some chocolate cupcakes from scratch. Mine usually taste like the chocolate part of a ding dong…very dense and dry, so an icing tube or cone or whatever you call it is needed to inject some icing inside as a filling. The original recipe comes from The Farm Chicks, but I cut it in half, so it makes 12 instead of 24. I can only avoid so much temptation.

I started to think about what kinds of things my mother liked, in hopes of finding a decorating theme. I travelled back to 2006 in my mind suddenly, a tattoo convention with my mother for our Sunday afternoon outing. The only 2 things that she would even remotely entertain as possible tattoo ideas FOR HERSELF were 1. a squirrel and 2. Jesus. I know my limits. I cannot make either of these into cupcake décor. I just can’t. If Bunny Rolls taught me anything, it’s to know my limits. Thinking…thinking…thinking…what else is she interested in? What is her house décor? Aliens…Eh, maybe. Oooo! Egypt! Yes! I will ice them with little ankh’s and eyes of Horus and squiggle bird language. I also stole some dark chocolate chips for cupcake decorating from the ingredients in my upcoming Mother’s Day Chocolate Chip Cookie post.

This also gives me a chance to show off my new cupcake carrier!. I got it for free by saving up Coke points. (Sorry to promote, but it’s a really cool carrier that fits 24 cupcakes and locks into a cover!)

I know in an upcoming post, Richard is going to pose the question, “Is the cupcake dead?” Partially in answer, I offer this, a recent Groupon deal: Groupon’s Cupcake Tour of New York, which is apparently still quite popular.