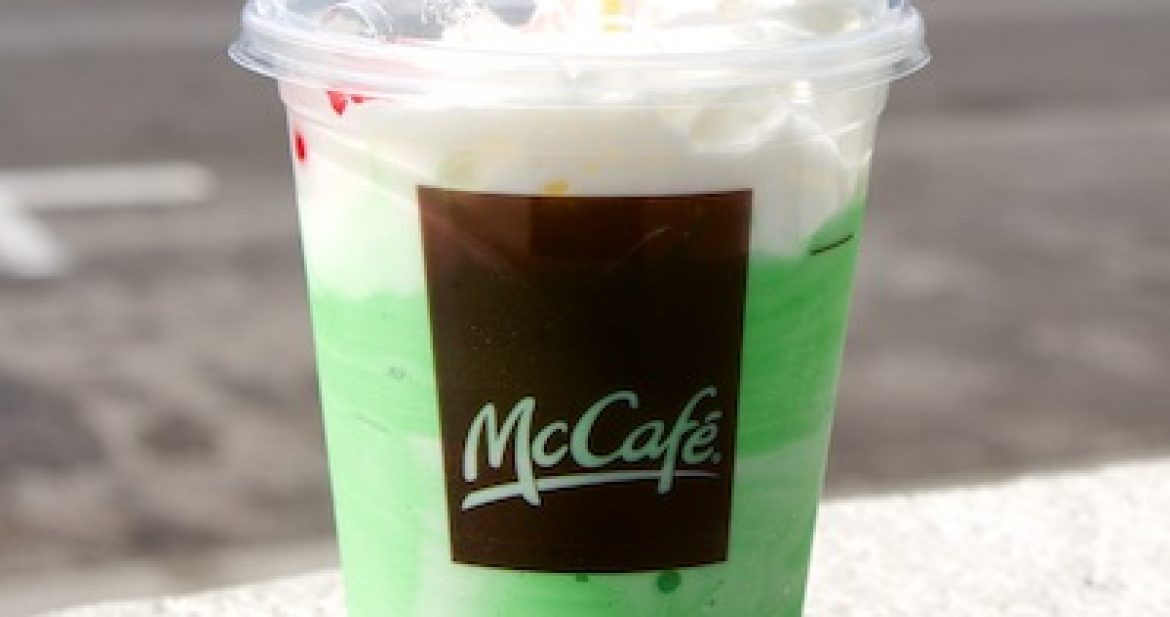 So its that time of year again where everything is green, including a lot of things you probably don’t want green. For some its a holiday where you get to the bar at like 6am and set up camp to drink the day away. I am not that guy. I don’t even think we have a parade around here so I am just going to work and carry like a normal day.

I did however see a picture somewhere a week or two ago of a McDonald’s shamrock shake. My first thought was ‘oh wow, they still make those?’ Then I realized that it must be about 20 years since I last had one. Seriously. So I thought that getting one might make a nice little St. Patrick’s Day post. So on my way to work today I stopped and got one. A small one, just in case it was horrible.

Its now part of the McCafe line-up though  I have no idea if that means anything in terms of its ingredients or quality or if thats just where all their drinks are now. Honestly since moving to LA 16 years ago I have probably been in a McDonalds less than 5 times so their corporate updates are fairly unknown to me. The second thing I thought was the color is way more fluorescent green than I recall. I don’t remember it being so bright.

I took the first sip and was instantly hit with the mint which in general I am not a fan of mint, but then the milky component immediately joins in and softens the whole thing out in a way that I cannot figure out. It came back in a flash, this taste combo. It was pretty much as I remembered it from all those years ago.  I honestly don’t get how or why it works but somehow it does.

Even as a kid I sorta remember wanting these, but not so much liking them which is a really strange dichotomy. Its definitely a food that probably shouldn’t exist but because it does only a couple weeks a year it works.

In any case I found the drinking of it somewhat reminiscent of how it was way back when… where I would take a sip, marvel at how odd it is, then rationally think ‘I’m not convinced I want to continue’ but there being some strange enticing appeal that brings you back for another sip. Its an odd push and pull all the way through.

All in all it was a nice blast from the past to help celebrate the day. I’m glad I only got a small though. I’m kinda still waiting to see how it sits and whether it will make itself known again later. 🙂