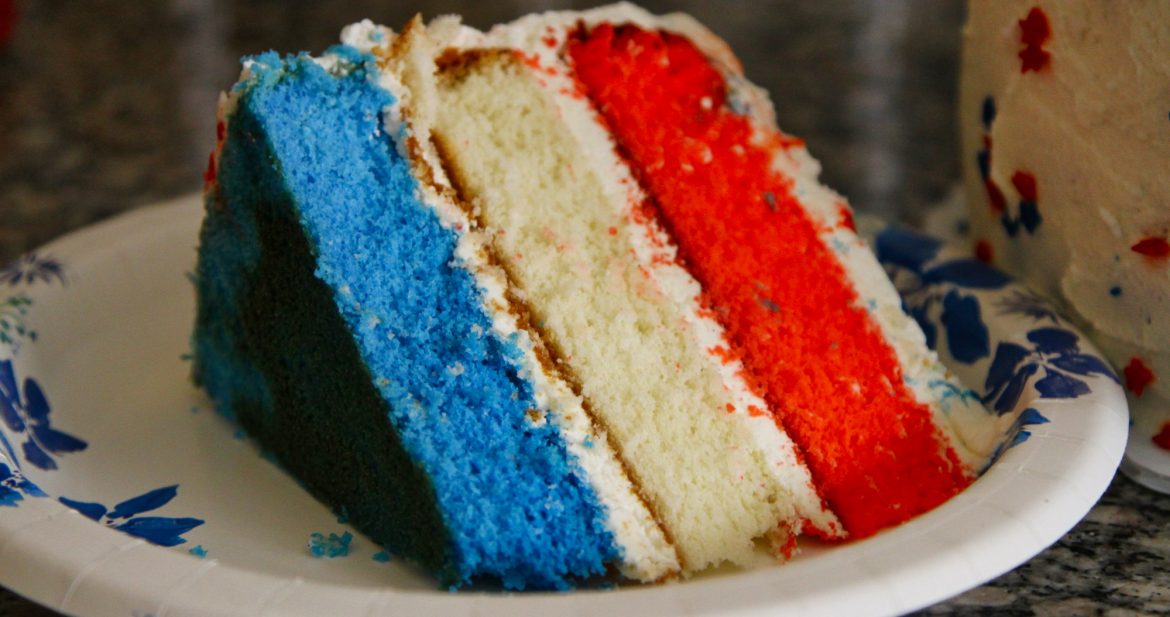 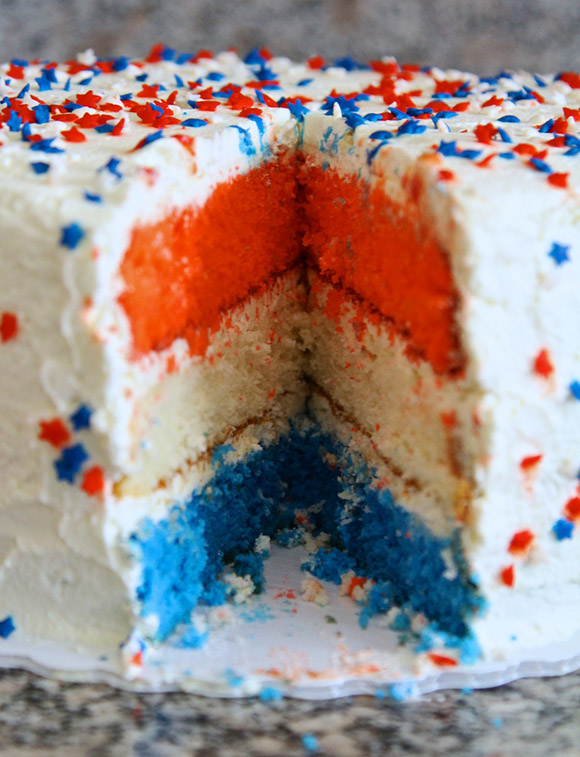 OK so this cake was originally made for a cookout on the 4th of July, but I realized when looking at a slice laying on a plate that it also looked a lot like the french flag. Conveniently by the time I got this post written up its Bastille Day which seemed like the perfect day to publish this. Now its about both 🙂

So to take a step back, I was invited to a cookout for the 4th of July. Everyone was bringing something for the party so of course I thought this was a perfect excuse to work on the old baking skills.. which of course also meant another excuse to buy more baking toys, but we will get to that later. I did a quick online search for some red, white and blue baking ideas. I came across this cake on the Betty Crocker site. Now given that I have made 1 2-layer cake previously, this exact cake seemed a bit advanced. Also, this recipe relied on using boxed caked mix (which makes a lot of sense given that it is the Betty Crocker site), but I like to make cakes from scratch these days. So I decided to use this idea as inspiration… and figured I would make a cake with a red, white and blue layer. It would no longer be flag-like but I thought the colors would be festive enough and seemed like something I could handle.

Now that I had come up with the plan I needed to find a recipe for white cake. I’ve only done chocolate cakes up to this point, so I didn’t have a go-to vanilla cake, nevermind a white cake. The inspiration recipe used white cake which i figured made sense as a yellow-ish cake would likely affect the colors a bit. So back to the internet to search for white cake recipes. I found a number of them and read the recipes and reviews from people who had made them and finally settled on this cake from Sweetapolita.com. From reading their post they had spent a lot of time trying to find the best white cake recipe around so I figured I would benefit from their effort. I also figured I would probably use the vanilla bean buttercream recipe that was part of this post as I had yet to try to make a buttercream (even though I tend to find them too sweet often).

Now I needed some supplies and since I was going to ratchet up the complexity I was going to need some new toys. 🙂 So I went to my local baking supply store and stocked up. While I was there I picked a cake leveler, a cake lifter, some red, white and blue star shaped sprinkles, red and blue gel food coloring, parchment rounds, some vanilla beans and some other random things. The rest of the ingredients I already had in stock.

Time to start the process, which of course, this being me I, means I started this at like 9pm. Anyway I got all the ingredients prepped and ready to go. The recipe itself was for 2 8-in round pans and since I needed 3 layers and only had 9 in-pans I decide to increase the recipe 1.5x. However the recipe given below will be for the original amount. 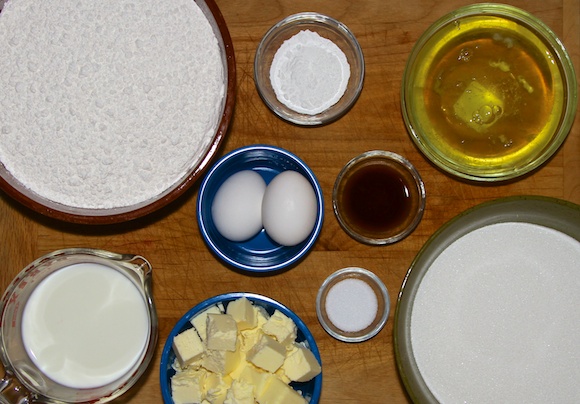 I made the batter as per the recipe. Then I split the batter into 3 equal portions. I mixed blue food coloring into one, red into the other and the third was left as is. I eyeballed the amount of food coloring. Once that was done I resumed following the instructions on baking. 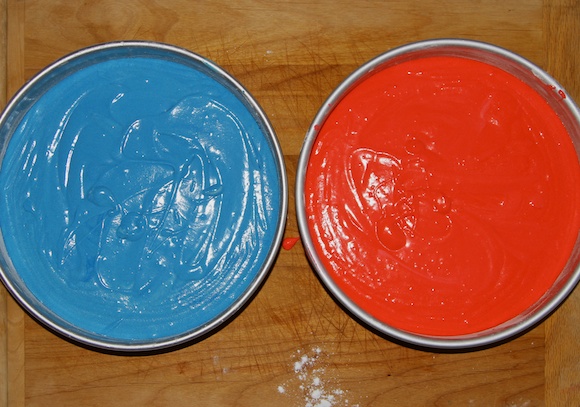 I’d like to take a moment here to discuss what turns out to have been my finally conquering these baking pans!  Well not the pans themselves but using them correctly and being able to get the cakes out in one piece. Beyond the parchment rounds I mentioned above, I greased and floured the pans this time, as opposed to spraying them with cooking spray. This combined with putting the parchment circle in the bottom worked beautifully and the cakes same right out!

I think I may have baked them all a hair too long. I wouldn’t call them overcooked at all. They weren’t dry or anything but my original intention was to err on the side of being slightly underdone so as to keep them super moist. In any case after all 3 layers were baked and cooled it was time to play with my new cake leveler. After all, I did want my layers to all be even since they would all be quite distinct from one another. I have to say due to the slight browning of the baking process, the blue layer was not looking a very nice color at all. However once the top was cut off by the leveler you could see the cake inside was a very vibrant blue, though perhaps not the navy blue I was aiming at. The cake leveler is an awesome tool and very easy to use. You just set the wire at the appropriate height, and saw back and forth as you slide it across the counter and through the cake. Getting the cut started was the trickiest part but all in all its a great addition to the kitchen. 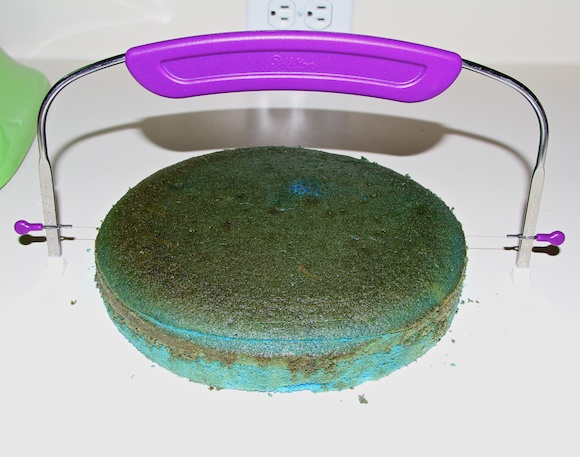 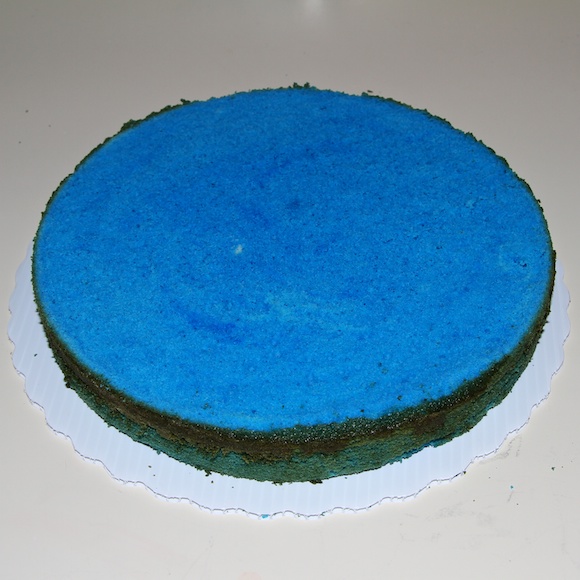 Finally the baking portion of this project was over with. All the layers were cooled and leveled. At this point it was already getting into the wee hours of the morning. And unfortunately I think my decision making skills were beginning to slowly degrade. Anyway, it was time to make the frosting. The butter had been out softening the whole time and may have been a bit too soft by this point but you have to soldier on. I assembled all the ingredients. 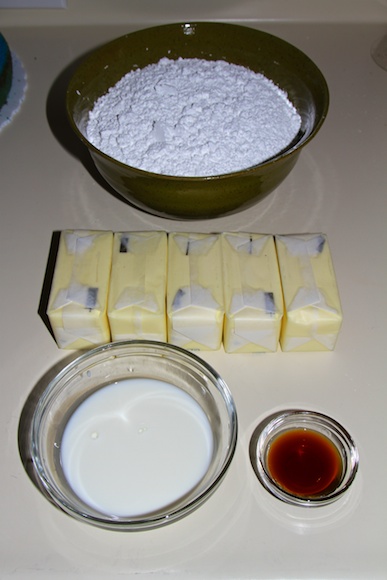 Unfortunately it seems I forgot to take picture during most of the frosting period, but it came out very much like the picture on the Sweetapolita site where this recipe came from. The icing was delicious, but really sweet. Probably largely due to the time I was beginning to convince myself that it was way too sweet. I already had a bias against buttercreams in general so I’m not all that surprised. I began to hesitate about whether I wanted to use it.

Now I had really loved the chocolate whipped cream frosting I had made a couple times before and I realized I had the ingredients around to make a whipped cream frosting so I decided that I was probably going to change my mind and go with that instead. SO I made a batch of vanilla whipped cream frosting but by the time that was done I really wasn’t in love with it either. It seemed sorta bland and I was not at all excited by it. This is when I sorta started to panic, as I really wanted this cake to be done by now, but I was really unsure which to use. I kept tasting them, and had even considered mixing the two together after tasting them together.

What I eventually decided to do was to use the buttercream in between the layers and as a thin coat on the whole thing. Then I would finish the whole thing with the whipped cream frosting, as though this would somehow balance it out. It was a weird idea. In retrospect I would have just used the buttercream the whole way. Yes, on its own the buttercream was really sweet but once combined with the cake I think it would have been totally fine. The mix wasn’t bad at all, it was still totally delicious but it just sorta didn’t make a lot of sense. 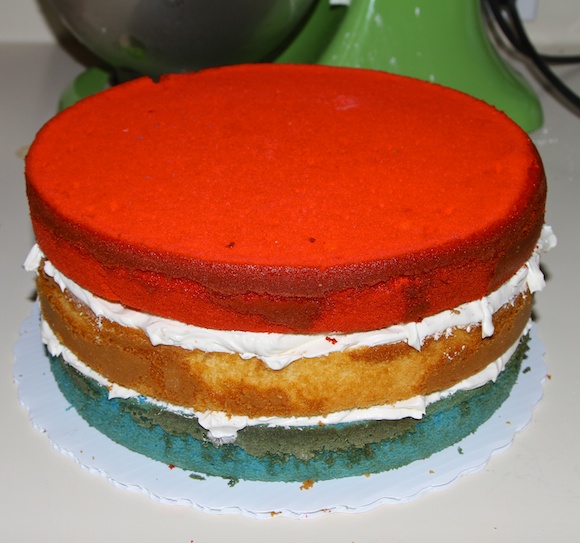 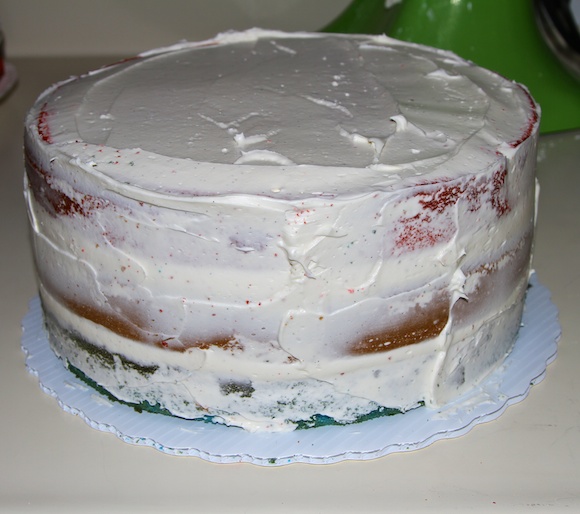 Then to finish it off I sprinkled the whole thing with the red, white and blue star shaped Quins. It looked really good and was totally ready for a patriotic cookout. 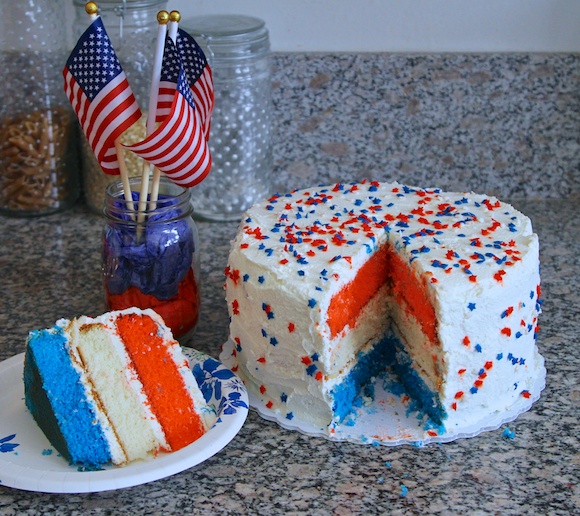 The cake as a whole was a big hit, both visually and in taste. I got many compliments on it, so overall I am quite pleased. Over course, being the perfectionist I am, I wish I had done some things better or differently but it was my first on the vanilla side of the spectrum. I need to play around some more to know if I have found my go to vanilla cake, but its definitely a strong contender. I will definitely need to try it without all the colors to see what the original intent is like as well.

With every cake I make I feel like I finally figure out a step or two even though I find something else I need to practice. All in good time. I hope everyone had a good 4th! (and has a lovely Bastille Day for any french readers out there)

NOTE: since I increased the recipe 1.5x and altered it for usage in multiple colors I am not going to reprint the recipe as I found it. You can find the original recipe for the white cake and frosting  here. The vanilla whipped cream frosting recipe can be found here. If anyone specifically wants the exact numbers I used I will calculate them again as add it to the post.