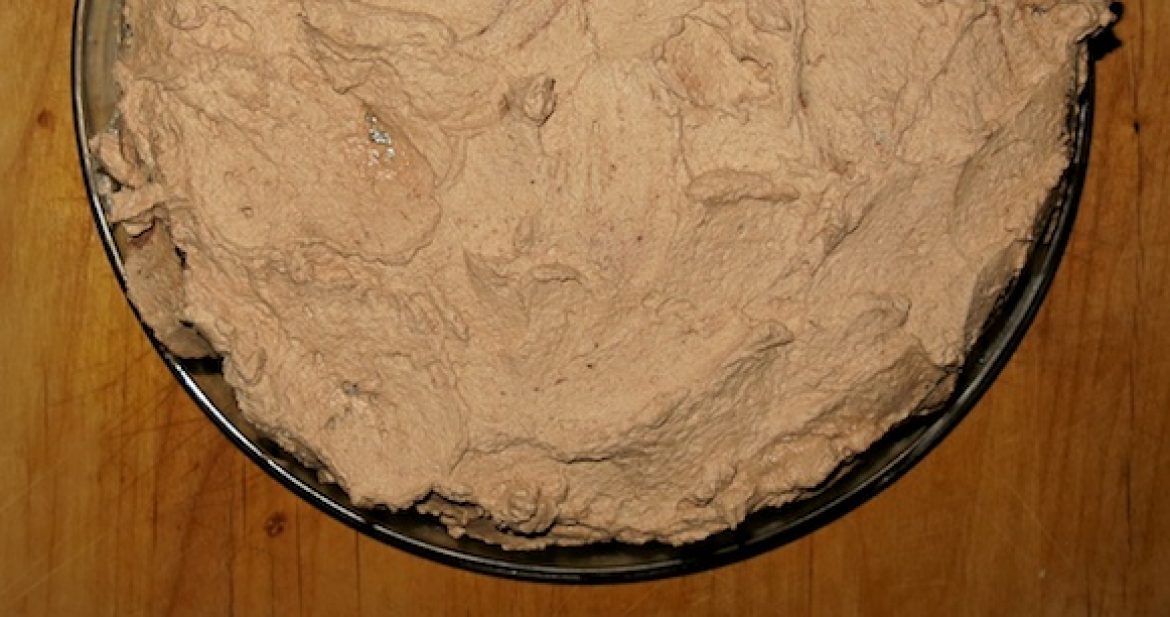 SO.. now that I had finally gotten my shiny new toy, I needed to take it for a test drive. I decided to bake a cake from scratch; a process I have not been part of in who knows how long. I really like the idea of making it from scratch. It seems healthier… a relative statement if ever there was one about a chocolate cake.

I looked around for a suitable recipe to start with. Eventually I decided to attempt this cake from Fabulously Frugal. I didn’t really want to start with a buttercream frosting though. I tend to find them too sweet, but I also wanted to try to make whipped cream with the new mixer so I thought a chocolate whipped cream frosting was probably the way to go. I found this recipe on Joy of Baking which seemed nice and easy.

Now I found myself fairly excitable and uncoordinated at the time so the pics I took along the way, which were not that many, all turned out pretty terrible. So this post isn’t going to be a how to kind of post. This time was about figuring some stuff out.. and I learned some very important lessons along the way:

In theory I knew this, though I have historically used it very little. Its your standard, rental apartment grade, cheap gas oven. There is no window and the knob broke off years ago.. its still there but always falls off and you can never really tell what temp you are setting it at.. thankfully we have a hanging thermometer to help monitor the temp but without the window this requires me to open the oven door all the time which I hear is a no-no. I finally was able to arrive at a fairly constant temperature (after the overflow debacle that is lesson 2) but one that was sadly about 50 degrees less than it was supposed to be so it ended up taking a lot longer to bake than called for. Thankfully I was checking it periodically with the ole toothpick.

Anyway probably the most comforting thing about this oven (and I say that in all sarcasm) has to be when, a few seconds after closing the door from checking the progress, you hear this “FWOOSH!” sound of what must be a giant fireball somewhere inside this metal box. One time I swear I saw the light from said fireball beaming out from the seam around the bottom drawer area… fun times! Somehow I don’t think the oven is supposed to just fill with gas until it finds the pilot light. call me crazy.

2. There is a level above which you should NOT fill your baking pans.

OK that one seems common sense but I never even bothered to think much about it and it surely doesn’t tell you anywhere on the pans. This point is especially true with the weird tiny cube shaped pan I bought at the restaurant supply place thinking ‘hey, a tiny personal sized cake!’.. the idea was sound in terms of me not eating an entire cake solo, but I should maybe have tried to do a little research before trying to bake with it the first time.

Yes the recipe called for using 2 9in cake pans and I only had one of those and this small cube… so I split the batter between them and left what I thought was an acceptable amount of space from the top of the pan. Apparently what happens after the cake rises is that batter just begins to pour over the edge and on the floor of the oven.. to burn.

LESSON(S) LEARNED: fill your baking pans less than I did (duh).. and just to be safe, place the pans on a tray that way any potential messes are contained.

Every single cooking show you watch you always see all the ingredients in a bunch of separate tiny bowls. I always thought that was a TV thing; limited time to film a segment so everything is there and ready to go and it looks better and more organized.. I mean who wants a bunch of boxes and bags ripped open in the shot. So beyond just looking good for the tv it always seemed to me like you were just creating 10x the mess you would then have to clean up.

Skip to me making this cake.. for every ingredient I need I am going back and forth rechecking the quantity I need (like 5 times each) and measuring it out all while the mixer is already going.. I’m now the uncertain bottleneck which I imagine may not be the best for the chemistry of the whole thing, certainly if it ever turns out that mixing time needs to be precise.  It turns out those little prep bowls are a super convenience, especially with keeping the actual combining of ingredients timely. Thankfully when I was at the restaurant supply place I bought a set of prep bowls because I thought they were cute and funny… well laughs on me.

So from now on they are going to be essential. I didn’t try them while making the cake, but I did when it came to icing time. Granted icing has fewer ingredients, but man it made it way simpler to have all the dry ingredients measured out and ready to go..

4.When using commercial grade aluminum bake pans, PAM spray does not cut it.

Again, I didn’t really do a whole lot of research so I just assumed spraying these pans down would be enough. They are in no way non-stick but I thought it would be enough. I had most of my issue getting the little cube shaped cake out of its pan. The 9in round wasn’t too bad this first time (though in subsequent attempts at making cakes it has only seemed to get worse) Finally I found some instructions telling me that I need to grease and flour them. So eventually I hope I will start getting whole complete cakes in one piece.. though thankfully you can hide a lot with copious amounts of icing 🙂

5. My ability to make icing needs some work.

OK making icing is going to take practice. Eventually I plan to try to make all types of frostings, though like I said at the beginning, I went for a chocolate whipped cream icing this time.  On this maiden voyage I don’t  think I whipped the frosting long enough.. so it was more an actual whipped cream and less a frosting, which proved to be issue when trying to get it to stick to the cake itself.. which I think is fairly obvious from the photo at the top. But hey, I didn’t accidentally make chocolate butter so it could have been worse. I need to whip it a bit longer next time though. (also chocolate butter doesn’t sound like a bad idea in theory 🙂 )

I’m generally a late-night person so this didn’t seem like it would be a huge issue. Sadly by the time, it was all done, especially since I was cooking longer at a lower temp, I was tired and it was really not an appropriate time to be eating a big piece of cake. So almost immediately after frosting the cake, it went right into the refrigerator and was not even sampled. Kind of a sad and unfulfilling conclusion to the whole production. Though one positive outcome was that the next day I had a piece and I must say this cake is awesome cold!

7. Now I need even more stuff.

SO I took this cake to work so that I wouldn’t eat it all myself. Getting it ready to go was when I had the realization that I had no real good way to transport a cake, or even to store a cake at my apt itself.. so now I need a cake plate and dome and a cake carrier.. and probably a cupcake carrier too. This whole cooking thing really needs a lot of gear.

Now, even with all these stumbling blocks, I have to say that the cake itself was stupid delicious! I declared it almost immediately to be my go-to chocolate cake recipe from here on out. Upon further reflection, though it might be worth trying a few more recipes just to be sure. Anyway, the whole combination was not too sweet and was super moist and delightful. It got many raves at works as well, even from people who don’t normally like chocolate cake so that’s not too bad for a first try!

So in summary, I am clearly a novice at this. But hey, I can only go up from here. 🙂

In the future, I will almost certainly make this again and I will make sure to do an actual recipe post then. For now, I am attempting to temper my sudden urge to become a master baker. 🙂

Previous Post: « Celebrity Chef Scandals: Nigella, Paula, and now, MasterChef
Next Post: From the Herb Garden: What to Do with Lemon Verbena »