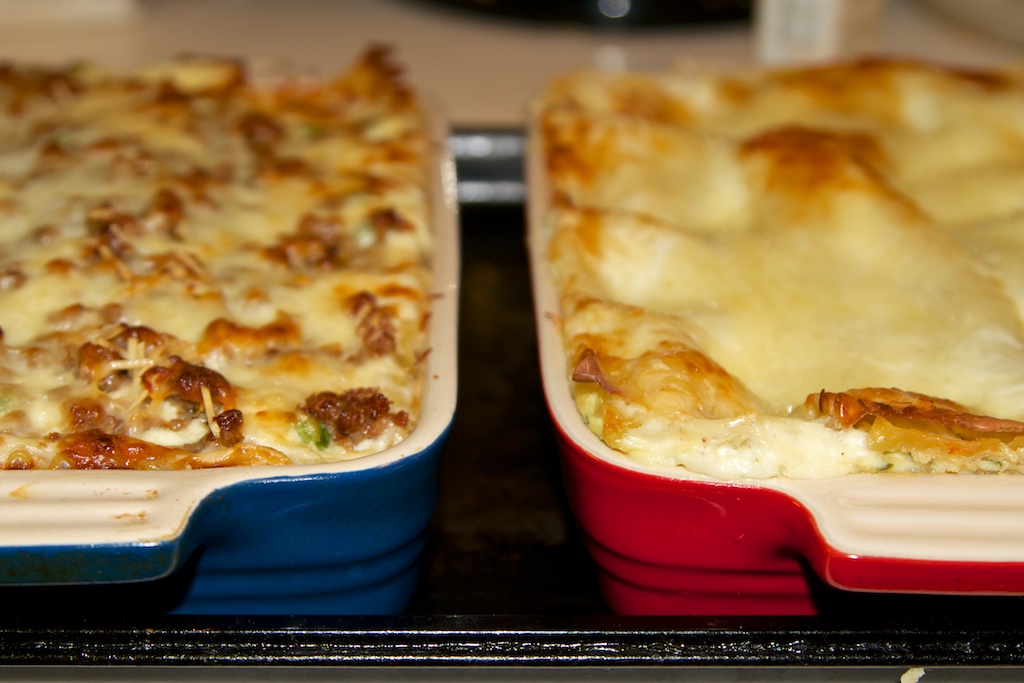 This post is really an introduction to the next couple of posts. I thought it might be interesting, or at least entertaining, to get a peek inside my seriously wacky brain and see the evolution of a idea, especially since these may possibly be the first dishes I made for the blog which weren’t just me trying a recipe I found, but are really me creating my own versions. A word of warning though, unless you are expecting a major amount of tangents, you are in for a surprise. The way my brain works cannot be normal so this should be an interesting ride.

First, lets start with the genesis of the basic idea. I have been thinking for awhile now about how I wanted to do a mac & cheese post but wanted to come up with a way to make it different so it might be more interesting. Much like how I believe that all Mexican fast food (ie taco bell, etc) is pretty much the same 5 ingredients over and over again but in different shapes, I thought ‘ok, I just need to take the ingredients and find a new way to put them together’. So I came up with the idea of making mac & cheese, but in the shape of lasagne. Revolutionary, I know!

I loved this idea because it could also save lasagne for me. See, I love the idea of lasagne but I am not a huge fan of tomato sauce in general and there is usually a lot of sauce in lasagne. I don’t really hate tomato sauce per se, but when I have it I want the minimum amount possible in order to just get the flavor. Like I would prefer the sauce and pasta be separate and even then I will take the ladle out of the sauce empty and just rub the ladle on the pasta so there is just a hint of flavor. OK that might be a tad hyperbolic… maybe, or not at all.  Thats my way at least when I’m not in control or else I would have a white or pink sauce to begin with. I’m weird. I know that and I’m totally fine with that.

Honestly, I think this might be an extension of my weird issues with the tomato in general. They totally creep me out. There is something about them that is totally gross and unfinished. The idea of the inside of a tomato repulses me, but I can handle it in other forms like ketchup or (a little bit of) tomato sauce. What I mean to say is that I don’t have pickle levels of hate by any means.

OK back on track.. Initially I believe I was thinking of your basic orange, velveeta kind of mac & cheese as lasagne (which i may totally still try in the future), but then I remembered a ‘fancy’ version of mac & cheese I first saw on an old episode of Mario Batali’s show Molto Mario. This had to be forever ago. It was a baked mac & cheese which used a béchamel sauce and fontina cheese. I made it a couple times and it was AMAZING (btw I so need to make it again for another post). So now these ‘fancy’ ingredients took over in the planning of this new dish. I mean I’m a grown up after all, right?

Now,  I was excited about this dish I was supposedly “inventing”, but I decided to google around anyway just in case someone had made something similar and had some tips or pitfalls I should avoid. I was vaguely bummed to find that ‘white lasagne’ already existed, but most of the recipes I found included chicken for some reason, which I was not about for this. They also mostly had ricotta and spinach. I did like the addition of ricotta which after all is fairly traditional in lasagne and would help loosen the whole thing up. I also figured the spinach was probably a good idea if for no other reason than adding a bit of color to break up the beige.

Ok so now we are here with a lasagne comprised of béchamel, ricotta, fontina and spinach. Not at all what I started with and largely a dish thats already out there, but it sounded GOOD and I wanted it.

BUT, the wide noodles and ricotta cheese got me thinking about a different dish I have had a couple of times at Little Dom’s in Los Feliz that I absolutely loved and have tried to recreate at home several times, to only decent effect. That dish was at the time a pappardelle pasta (they changed the pasta since) with ricotta, sausage and peas.. *drool* Damnit, now I want to try to make that in lasagne form too. I half debated blending it all together but it didn’t all seem to blend right in my head. The spinach seemed out of place with the peas and sausage and I still liked the non-meat version on its own, but there was no way I wanted to make two giant pans of lasagne.

Now lets take a break for a second and look back at the title of this post. We’ve definitely covered the white lasagne and by now the addled brain part should be abundantly clear. But where does Le Creuset come in?

Way back at the start of this blog we learned of T’s love for her collection of Le Creuset. I have always liked them as well but I hadn’t thought about collecting them myself at all until recently. It might be that as we started this blog, if I made anything it was usually focused on baking and I tend to think of them more for cooking and roasting. Whatever the reason, in the last couple of weeks, I have become obsessed and i mean OBSESSED with finding them on the cheap. I knew where T had previously found them at discount prices and so I set out crossing the city back and forth like a crazy person looking for them, not in the “as i happen upon them’ way I had intended. So I have managed to create a fairly good collection quite quickly, at least of the small sized stoneware. The last one I found was this beauty below;  the largest rectangular I have found, but one that is maybe half the size of a normal lasagne pan (as I think of them). And thats when the lightening struck and everything came together! 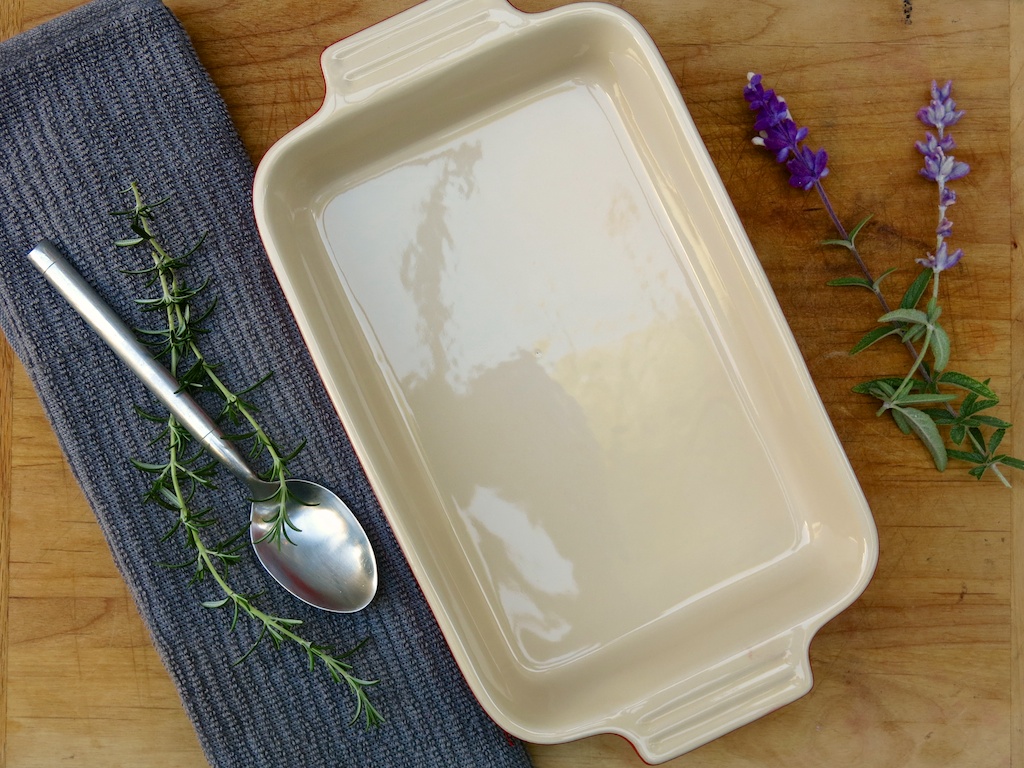 I knew T had one this size as well..  so the solution was to make 2 small/half lasagnes! That will solve my problem of having to decide which one to make and would also allow me to not have 2 weeks worth of lasagne leftovers. So thats exactly what we did! 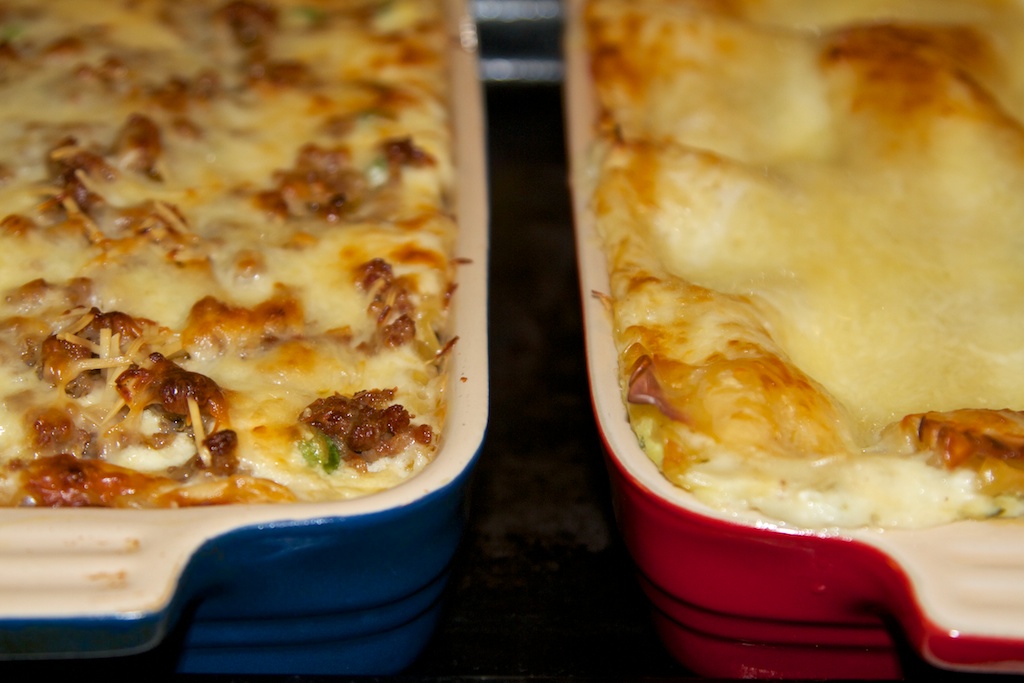 So yeah I started with one idea which morphed into 2 completely different other ones, but they were both so good that I don’t care in the least. I did have some scaling issues which I will address in each individual post.

First up on the next post we will begin with the White Lasagne with Spinach!